Real Housewives star Heather Dubrow joined The Doctors to discuss some of the hottest new health products she has personally tried. She and her husband actually have a book coming out that’s all about what happened when they turned themselves into guinea pigs in order to try different health and beauty treatments. She actually tried Breast Gum, which allegedly contains plant-based estrogen that can reportedly enlarge your breasts. Heather claimed that although she lost weight, her breasts stayed the same, acting as if the gum was the reason.

Next, Heather showed viewers a pillowcase that allegedly helps with acne. Heather likes to sleep on silk but she showed a pillowcase with ion technology that can reportedly protect against bacteria. Heather said she would actually say skip the pillow case and instead just wash your pillowcase more often and use a gentle cleanser. Plus, never sleep in your makeup. She believes it’s a waste of money. 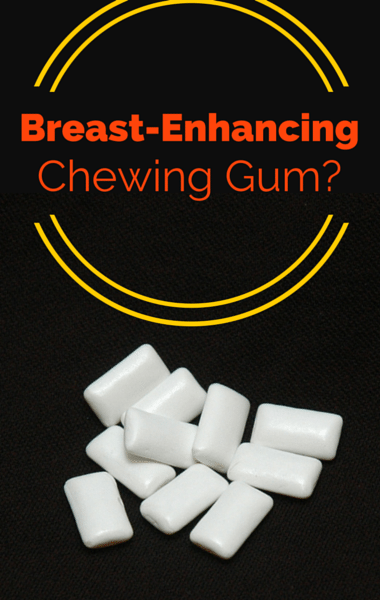 Does breast-enhancing gum really work? Real Housewife Heather Dubrow put it to the test and shared her opinion with The Doctors! (korny-brot / Flickr)

Is there a specific health or beauty product you tried recently that you recommend others try? Please, share with us. We’d love to hear from you!

Would you believe that plastics, formaldehyde, gasoline, and tar could all potentially be ingredients in your favorite skin care products? According to a recent U.S. research report, one in eight of the 82,000 ingredients used in personal care products are industrial chemicals. We absorb up to 60% of what we put on our skin, which means those chemicals could be the cause of certain health problems. Be sure to check the label before you use or buy a product, to be sure you know what you’re putting on or in your body.

Dr Trevor Cates explained that we use on average about nine personal care products each day. That means we are exposed to up to 126 unique ingredients. First, formaldehyde is known to cause cancer, but it’s used in skin care and is called formaldehyde releasers. Formaldehyde can be released into the air and breathed in whenever those skin care products are used. You should stay away from DMD Hydantoin because companies won’t just put formaldehyde on the label.

Consumers should also look out for mineral oil because it comes from petroleum, while gasoline is also made from petroleum. When it’s not properly treated, mineral oil and be carcinogenic. Compounds of mineral oil can build up in your bodies, in your fat and in certain organs. There are natural alternatives like rosemary leaf extract as well as argan oil. If you see coal tar, avoid that product because it’s also a carcinogenic, and use something like aloe instead.

The Doctors: Quick Tips To Brighten Your Smile

One survey found that you’re 58% more likely to be hired if you have a crisp, clean smile as opposed to yellow teeth. To give your teeth a brighter appearance, stay away from bright white and warm colors like browns and tans, because those will wash out your teeth and make them look less white. Go for off-white or beige instead. You can also go for rhinestone or white diamond jewelry instead of yellow gold. Lastly, choose cooler shades of eye shadow like blues and greens to act as an optical illusion!

Illusion was the word of the day and you can use the word illusion to enter on The Doctors’ website for a chance to win part of a complete dental care package from WaterPik.

For The Doctors News in 2:00, everyone on the show wished viewers a safe and fun Memorial Day holiday weekend. To stay safe in the sun, remember that damage can occur in as little as 15 minutes. Always use a broad-spectrum sunscreen with at least SPF 15 before going outside and reapply after swimming or sweating. If you’re cooking or grilling, be sure to keep your hands clean, as well as all utensils and work surfaces. The CDC warned that food poisoning peaks in the summer months.

Melissa Gilbert was told by doctors that she is “physically unable to continue [her] run for congress. She was running for Michigan’s 8th Congressional District Seat. A whiplash and concussion sustained on Dancing with the Stars, followed by a balcony collapsing on her head, compounded a long history of neck and spine issues for the 52-year-old.

The Doctors: Soldier Battling Bulimia While At War In Iraq

Theresa Larson was deployed to the front lines of the war in Iraq, but the First Lieutenant was struggling with her own personal battle at the same time: bulimia. In her memoir “Warrior,” Larson talks about coping with the stress of war by vomiting up to five times a day. A study published in Military Medicine found that 62.8% of female soldiers suffer from some sort of disordered eating. Larson went into therapy to treat her compulsive behavior with food and went on to found Movement RX, offering help for wounded warriors through an adaptive strength class.