A patient named Brian reached out to The Doctors for the help regarding his painful skin lesions. When he was 17, he noticed a large, red, irritated bump on the back of his neck. Since that time, the bumps have spread and now he has severe acne lesions and scars under his arms, across his chest, and on his legs. Brian said he can’t go to the gym or to the beach and doesn’t even like taking his shirt off at the gym. I have to say, when you hear “severe acne“, you have an image in your head. Trust me, whatever that image is, it’s not as bad as what Brian had. The images they showed of his back and arm were terrible. I’ve never seen acne or acne scars like that. 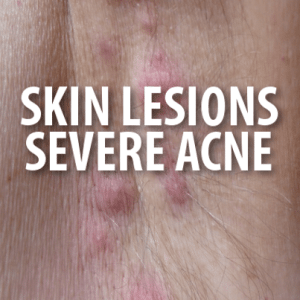 The Doctors helped a patient with severe acne and scarring on his body.

Brian wears his collar up and an arm band on his arm to cover it up. “These lesions are preventing me from living a normal life,” he said.

The Doctors had Brian see dermatologist Dr. Glynis Ablon, who said that Brian has a disorder of the apocrine glands called hidradenitis suppurativa. This condition causes hair follicles to become inflamed and blocked. It usually occurs where sweat and oil glands are found, including in the arm pit and neck, where some of Brian’s worst lesions are found. These cysts can cause extreme scarring and can easily become infected. They’re a very severe form of scarring acne.

Dr. Gylnis Ablon has decided to use laser therapy and steroids to treat Brian’s active cysts in order to reduced the appearance of his scars. The laser therapy was to permanently remove the hair of his arm pits to prevent hair follicles from growing so that no more cysts would be formed. Dr. Glynis said that it’s critical to treat this condition as soon as possible to reduce scarring.

Dr. Glynis Ablon is also injecting scars into Brian’s skin to flatten out his scars and using another type of lasers to repair the skin. The Doctors gave Brian one year of sessions to help him reduce the scarring and treat the lesions.