Renee Fleming came by for a performance on Live! With Kelly & Michael as a part of their Holiday Hits Week. Every day this week a different artist will come by to perform a holiday song, and Fleming was there to kick the week off with Kelly Ripa and Michael Strahan. I was really excited for this performance too. Fleming is an insanely talented soprano and opera singer, and I knew she was going to do an amazing job. I was excited to see what she was like live and couldn’t wait to hear her. Plus, it’s a fun way to get into the holiday spirit. Her first holiday CD, Christmas in New York, is available now and sounds like it’s amazing. 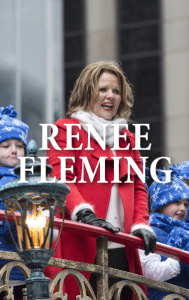 Fleming performed the song “Sleigh Ride” on Live! With Kelly & Michael and it was just as mind-blowing and amazing as you would imagine. She has such an incredible voice it’s actually unbelievable. She sang with a band, and it was a lot of fun and very festive. And she just looked like she was having so much fun. I also love how thy decked out the stage for the holidays. It was very festive, with some beautiful Christmas trees and fake snow, as well as a holiday-themed screen in the background. It just gave a very festive air. “That was a treat,” Kelly said. She said they were honored.

Fleming will also be performing for Prince William and Kate, which is so exciting. How does that happen? Sting couldn’t do it, so he recommended her. That’s actually amazing. He’s in his show on Broadway now, so she got to do this. She’s never sung at the venue either though, so she’s very excited. She said Kelly & Michael could have a trio. Everyone wants to go with her. Her friends and family have been asking her too.

She’s also starting The Merry Widow at The Met on New Year’s Eve, which is so exciting. It sounds amazing and has a really good cast. They even joined her on her new album too, which is awesome.