Live! With Kelly & Michael continued its Holiday Hits Week with a visit from Sara Evans, who came by to perform a holiday song, obviously. I really didn’t know too much about Evans, but she seemed like she had a really great voice and like she’d give a great performance, so I was excited to hear more. I’ve also really been enjoying Live! With Kelly & Michael’s Holiday Hits Week. It’s really festive and fun and is a great way to get into the holiday spirit and kick off the holidays. They really go all out for the holidays, which is a lot of fun. She’s a multiplatinum selling recording artist and one of country music’s biggest stars. Her new holiday CD, Sara Evans at Christmas, is available now. 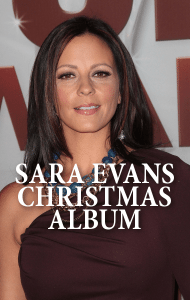 Evans performed the song “At Christmas.” It was a really fun, energetic song. And it was definitely something that everyone would love, not just country fans. It just had a really fun song about how she just wants to be with her friends and family at Christmas. It was a really sweet holiday song to get you into the spirit of the holidays, and she did have an amazing voice.

She also had a band and backup singers performing with her, which was nice. She performed on the Live! With Kelly & Michael stage surrounded by Christmas trees and fake snow with a festive background on the screen behind her. It was just a really fun, cheery, festive vibe. Kelly Ripa said it was gorgeous and Michael Strahan said it was great. She even made it snow.

Kelly loves her CD. It’s her first Christmas album, which Kelly couldn’t believe, but she loves that she made it.

Connie Britton’s character on Nashville is loosely based on Sara Evans’ life. She got to tell them what it’s really like to be a country singer, wife, mom and real person and she can see what she talked about in the show.

Evans’ her backup singers were actually her sisters, which was really nice. She said that they never fight, which is awesome.