Fall Out Boy came by Live! With Kelly & Michael to perform their hit song “Centuries,” which I really like, and to talk to Kelly Ripa and Michael Strahan for a bit. I don’t listen to Fall Out Boy too much, but I used to so I was really excited for this performance for nostalgia’s sake.

They’ve really been everywhere lately though. They’re on the radio a lot, which is really exciting, so I was curious to see what they were up to these days. I think they’re really talented and they’re always really energetic, which I like. Fall Out Boy’s new CD American Beauty/American Psycho is available now. They joked that it was flying off the shelves because Michael dropped his CD. 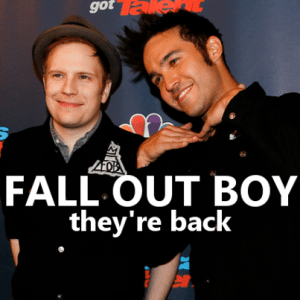 Fall Out Boy performed their hit song “Centuries,” which has been all over the radio lately. It’s such an energetic song. It’s a real anthem about how you’ll remember me for centuries. I really like it. It has such an amazing energy and it’s so clear that Fall Out Boy loves what they do.

They just seemed to have so much fun while they were performing. And their music is really unlike any other music on the radio. It’s just really good, fun music. They’re so talented too. Kelly was really into it. Michael said he was tired watching their energy.

Kelly called the cover of their album intriguing, but hauntingly familiar. They said that they had seen it before. Then Art Moore came out looking like the cover. He had black paint running down his face and turned around looking very serious. It was absolutely hilarious. Kelly asked them if that’s where they got the inspiration for their album cover. Of course it was. Where else would they get it from? I thought it was pretty funny.

Fall Out Boy has a new tour coming up in summer 2015 with Wiz Kahlifa for eight weeks. They will be starting in June. Kelly said that whenever she sees them, she wants to be a rock star. They hadn’t gotten that kind of compliment before, but they were flattered. It made them feel like rock stars. It should, though, because they are.