Home > Uncategorized
When you buy through our links, we may earn an affiliate commission. As an Amazon Associate we earn from qualifying purchases. Learn more.

Today Show: All Episodes Of House Of Cards Netflix Series Released At Once

House of Cards is going to change how you watch television shows and Robin Wright and Kevin Spacey are two of the first actors to take the next step in the evolution of television. Both the actors are staring in a Netflix original series, House of Cards, but it is a bit different than other TV shows: every episode is available right away. 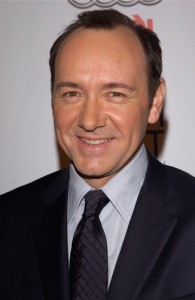 The Today Show talked with Kevin Spacey and Robin Wright about how the show House of Cards, a Netflix original series, is changing the way we watch television. (Featureflash / Shutterstock.com)

Spacey said he thought it was a great idea to release all the episodes from the show at the same time because people have longer attention spans than was previously thought. He said he has often talked to friends about their weekend and many times they say they didn’t do much except watch a couple seasons of a show on Netflix. With so many shows being pirated, Game of Thrones being the most pirated, Spacey said he wanted to give people what they wanted – instant gratification.

Robin Wright said it is the consumer who makes the choices. “Don’t dangle the bait in front of them,” she said, “just give it to them.”

In the show House of Cards, Spacey plays Rep. Frank Underwood, a ruthless politician who has been passed over for Secretary of State, who will do whatever it takes to get the top spot in Washington. Spacey said he is a very unique character because he is able to predict what you are going to say even before you say it. “I feel like I am playing in a champion chess match,” Spacey said. “He thinks 12 moves ahead.”

Kevin Spacey and Robin Wright said they have been friends for 30 years but this is the first time the two have worked together. Wright said she likes having this banter on a daily basis and having the chance to work with someone who can improv on the spot or go from the script.

Speaking of the characters on the show, Wright said they are a “calm and calculated duo, not a warm and fuzzy couple.”

You can watch all 13 episodes of House of Cards starting tonight on Netflix.