Jay Leno posts some questions for fans and audience members to answer on his Facebook page for his Off The Wall segment. Check out some Jay Leno look alikes, read viewers’ best hoaxes, and get Jim Harbaugh reaction jokes from fans. 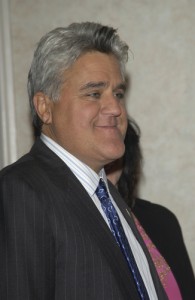 Though Jay thinks he has a normal-looking face, viewers like to send in images they think look like him. One was a French poster of a man playing an accordion.

Another viewer sent in a photo of an old woman doll she thought looked like Jay, while someone else submitted a photo of “a stain on a concrete wall.” Even bandleader Rickey Minor agreed it bore a resemblance.

Jim Harbaugh was up in arms over a blown call at the Super Bowl. Tonight Show viewers were quick to offer captions for the photo.

The Tonight Show’s Cowboy Bob took viewers’ best Facebook breakup stories and put them into a song, just in time for Valentine’s Day. It did make a nice country song.