The Tonight Show: Off The Wall

Jay Leno and his team at The Tonight Show love to ask questions on Facebook for viewers and fans to answer. Then these are collected for the show’s Off The Wall segment. Why do roosters crow? Would you have any use for a Jay Leno action figure? 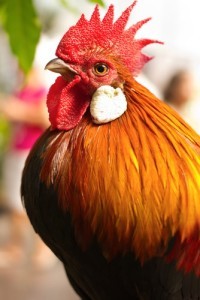 Do you think that Jay Leno has a unique face? He said he does not believe that anymore, because viewers are constantly submitting photos of people and inanimate objects that may resemble the late night host.

One of them was Isaac Parker, a “frontier lawman,” which did bear a resemblance. Someone else submitted a senior care center directory with a photo of a woman that may look like Leno’s sister.

Then there was a rock that allegedly resembled the host. What do you think? I definitely draw the line at the Shrek photo in terms of likeness.

Jay Leno: Why Do Roosters Crow?

Japan is spending millions in research to determine why roosters crow. To save time and money, Jay Leno just asked his Facebook fans what they think.

One man suggested it’s because they can only talk while the women are asleep. Aren’t you going to miss this misogynistic humor once Leno retires?

Another said that they are glad not to be Chicken McNuggets, while someone else explained it’s because they cannot tweet.

What do you do with your Easter grass to recycle it after the kids’ Easter baskets are empty? Viewers suggested making a wig for Kim Jong-Un, turning your dog into a Chia pet, or smoking it. Don’t do any of those things.

What is your prom nightmare? Viewers shared their own stories, including a woman who said she took out a senior when she was a sophomore, and he wouldn’t put out for her.

Another woman said that her brother arranged a date for her by passing a note–to the wrong guy! She went on the date anyway.

Then someone admitted that her date burped in her mouth while they were kissing. That is straight up rude. Another found out that her date lied to her about a family member being in the hospital because he wanted to watch the old Carson Tonight Show.

A viewer created a Jay Leno action figure riding a motorcycle, which spurred viewer requests and led to a commercial. I want to trust that this will not become an actual consumer product, but you never know.