Pope Francis was still a hot topic on The Tonight Show. The selection of another septuagenarian pope, this time with only one lung, “could be just the burst of youth and vitality the Catholic Church needs,” Leno said.

The Vatican was very excited at the selection. “They were partying like it was 1299,” Jay joked. 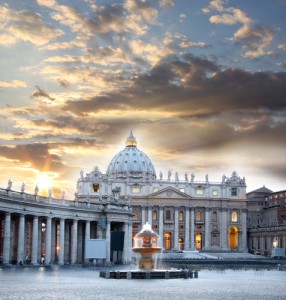 Jay Leno mentioned Pope Francis’s lung condition and advancing age in the aftermath of his election, as well as the upcoming Michelle Obama Vogue cover.

But he feared that the papal selection was becoming too commercial, featuring a Cool Ranch Doritos Tacos banner hung from the Vatican balcony.

Pope Francis came in second place during the previous papal conclave, which may mean Mitt Romney still has a shot in 2016.

As a man of the people, Francis gave up his worldly possessions, including his car and his house, to live among them. That means any divorced guy could have been chosen as pope, according to Jay.

The first conclave was in 1268, according to MSNBC, when locals locked the cardinals away together in hopes of getting some decisions made. “Why can’t we do that in Washington?” Jay wondered, which is actually a great question.

First Lady Michelle Obama is on the April 2013 cover of Vogue. That can only mean that Joe Biden is heading for the cover of Hard To Digest magazine, per The Tonight Show. Then there is a forthcoming book from Sarah Palin, No, I Won’t Just Go Away.

Another Carnival cruise ship is having trouble with its power, breaking down and disabling toilets. This ship is named the Dream. Jay suggested more realistic names, such as Misery or Defeat.

A new study has concluded that a person’s Facebook likes can reveal confidential demographics about you. What do you think of this revelation? Will it change the way you use Facebook?

A Glass Door survey found that 12% of workers have been intimate at work. That could be why no one is ever around to help customers at a hardware store.

China officials say that finding thousands of dead pigs in a river will not contaminate the water, which is part of the area’s water supply. Maybe the water will be bacon flavored?

A shark recently died in Los Angeles after being shipped cross country and put in a pool to film a Kmart commercial.

A former KFC in Los Angeles is now a medical marijuana dispensary. Jay said that three new KFC restaurants suddenly sprung up on the block.

A Today Show correspondent recently traveled to Antarctica to pretend to be a penguin. In Jay’s doctored video, the reporter was eaten by a shark.

Lindsay Lohan is preparing for trial after her plea bargain negotiations fizzled. Now, she may face hours or even days of jail time.

Leno said he was disappointed with the season finale of The Bachelor, because President Obama did not use his drone technology to put a stop to the proceedings.

George Soros, the 82-year-old billionaire, is suing his twentysomething ex-mistress for throwing a lamp at him. Would you want the lights on in that situation? Jay thought not.