Home > Tonight Show > Tonight Show Interviews
When you buy through our links, we may earn an affiliate commission. As an Amazon Associate we earn from qualifying purchases. Learn more.

After winning big at the Academy Awards with Argo taking home the Best Picture Award, Ben Affleck is the man of the hour in Hollywood. Instead of stepping back behind the camera, Affleck is flexing his acting muscles with his role in the new Terrence Malick film, To the Wonder. 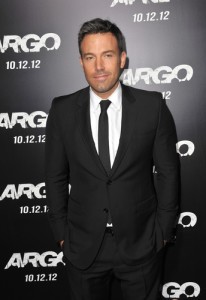 Ben Affleck is already starring in another movie, To the Wonder, he has shaved his beard off and he’ll talk to Jay Leno about if he kicked the paparazzi. (Featureflash / Shutterstock.com)

In the movie, Affleck plays the role of Neil, a man torn between two women – Marina, played by Olga Kurylenko, and Jane, played by Rachel McAdams. The film centers on the decisions Neil makes surrounding these two women who both have a place in his heart as he struggles with whether he wants to be with Marina, who moved to the United States to be with him, or be with Jane, an old flame Neil starts to rekindle when his relationship with Marina starts to fade.

The film, which should be hitting theaters in just over a month, recently released a poster with Affleck and co-star Kurylenko embracing in front of Mont Saint-Michel, the rocky island that inspired the name of the film. It is often referred to as the “Wonder of the Western World.”

Rumors have been circulating that Ben Affleck kicked a member of the paparazzi this past weekend while out with his daughter but new reports are saying he didn’t kick anyone. Affleck said he simply pointed at the paparazzi and told them to stay “this” far away as he swung his leg around in a circle.

Did anyone ever think Ben Affleck would kick someone? He is way too nice of a person.

After taking home the Best Picture Award, it seems Ben Affleck has been taking some time to hang out with his daughter more. He has been seen all over Hollywood hanging out with her, taking her to breakfast and taking her shopping for toys.

He even found some time to shave his beard off.

The real question is, do you like Ben Affleck better with or without the beard? Let us know in the comments.