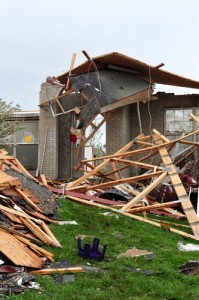 Extensive damage was wrought upon Moore, Oklahoma by the May 20 tornado. (Martin Haas / Shutterstock.com)

The tornado that hit Moore, Oklahoma on May 20 2013 was classified as an EF-4, the second highest category of tornado whose winds can range from 166 to 200 miles per hour. It not only tore through the town, but it also passed through two elementary schools, Tower Plaza and Briarwood.

While there were no reported fatalities at Briarwood Elementary, there were sadly seven youngsters lost at Tower Plaza. They were found on a lower level of the school that had flooded, causing all of them to drown. It is not yet known why they were moved here.

Some brighter news of heroism that came from Tower Plaza was of a teacher that laid across six students to protect them from the storm. All student from her class were saved.

Savannah Guthrie had a quick word with the mayor of Moore, Oklahoma, Glenn Lewis. He says that the death toll is currently at 51, and he is trying to remain optimistic that it will stay the same, while the numbers of discovered survivors continues to rise. He also said that he is thankful for the heat sensors that the fire department bought. They have been instrumental in finding survivors as the search and rescue teams have moved door to door. Mayor Lewis also mentioned that there are plenty of shelters and churches taking people in.

Matt Lauer and Al Roker went to the Moore, Oklahoma medical center to show us just how powerful the May 20 tornado was.