Well what do you know, Savannah Guthrie is getting married! Guthrie was simply luminant as she showed off the engagement ring that was given to her this weekend by long-time boyfriend Mike Feldman while the two were on a getaway.

Savannah and and Mike’s mothers were overjoyed to hear the news, according to Savannah. After the two had been together for four years, their parents were waiting with baited breath for them to finally tie the knot. Even Natalie admitted to checking Savannah’s finger every time she came back from vacation.

Chris Hadfield, the commander of the International Space Station, had his last day in space this weekend. To commemorate the event, he released a music video cover of David Bowie’s “Space Oddity.” It was pretty cool. Check the video below.

California Subdivision Swallowed Up By Sinkholes 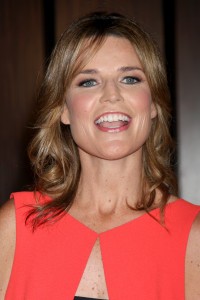 In what residents are referring to as a “slow-motion disaster,” houses in a northern California subdivision have begun to be swallowed up by the earth. Groundwater that has been making its way to the surface, a theory from the people trying to figure out this phenomenon, has softened the ground and caused the sinkholes to open up.

Eight homes in total have been evacuated so far, with 10 more in notice of imminent evacuation. With problems like these occurring in Florida as well, who knows where this may happen again.

There was an open casting call this weekend in San Diego for Anchorman 2, and over 1,500 aspiring stars showed up to capture their part of the limelight. The nature of the part wasn’t known.

Perhaps Al Roker should have showed up. He was in local news in the ‘70s, and he talked about how he had a four-piece polyester suit with 80 combinations. Then there was, of course, the incredible facial hair, which he had in spades with his mutton chops. Stay classy, Al Roker.

Jay-Z Has a Doppelganger

Jay-Z has a doppelganger…or had a doppelganger. A photo taken in 1939 surfaced on the internet this weekend that looked, well, pretty much exactly like the New York rapper. Even the rapper weighed in and said that the photo looked a lot like him. Is it real or fake? You decide.