The Today Show Professionals, Donny Deutsch, Star Jones and Dr. Nancy Snyderman, stopped by to talk about some hot button issues and the first was a potentially racist tweet from John McCain to the president of Iran, Mamoud Ahmadinejad. Ahmadinejad recently said he wants to go to space as soon as his government starts their manned space flights. After hearing the comment Sen. John McCain tweeted, “So Ahmadinejad wants to be the first Iranian in space – wasn’t he just there last week?” and he linked to a story about the Iranian government sending a monkey into space. Was it a joke or was the comment racist? 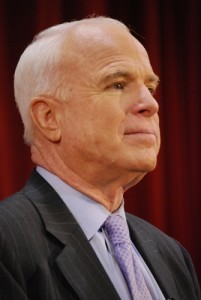 The Today Show Professionals discussed their thoughts on a photo of Obama skeet shooting, what they thought of John McCain’s tweet and celebrity privacy. (Frontpage / Shutterstock.com)

Star Jones said McCain diminished himself by sending the tweet and she was appalled she was actually defending the President of Iran, someone who has denied the holocaust and threatened the safety of the United States. Even Rep. Justin Amash, from Michigan, tweeted back at McCain and said he should lighten up and “not make racist jokes.”

Deutsch, on the other hand, said it was fine to call Ahmadinejad whatever he wanted because Ahmadinejad is a terrible person in the first place. And Dr. Snyderman agreed with him. But she was also curious to know if it was actually McCain who sent the tweet or if it was one of his aids.

What do you think? Let us know in the comments below.

Obama was asked at a press conference if he has ever fired a gun and he told the reporters they often skeet shoot at Camp David. Although many people did not believe the President, on the eve of a speech he was giving about gun control, a photo of the President shooting a gun was given to the press.

Deutsch said it was contrived, as did Dr. Snyderman. They both pointed out the President is trying to make people think he is more than what he says he is and he is trying to let people know he isn’t going to be taking their guns away, he just wants to regulate the guns in our country.

Steven Tyler has a home in Hawaii, the same state he is trying to have the Steven Tyler Act passed into law. The new act would allow people the right to file a civil suit against paparazzi who are taking pictures of them in areas that should be private.

Star Jones thought the new act was going to get Tyler into a lot of trouble. Although she agreed celebrities should have privacy when they are sitting on their back porch and shouldn’t have to worry about a photographer with a telephoto lens snapping pictures of them, she also said it is hard to prove where the privacy starts. Just because you have shrubs around your pool, does it mean it is private?

Deutsch thought it is was wrong to enable this act because he said celebrities will often invite photographers in their home for a 10 page spread in a magazine and now they are getting mad about people taking photos of them. He didn’t think it was right.