Today Show: The Extent Of The Destruction In Moore, Oklahoma 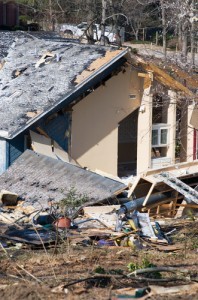 The Moore, Oklahoma Medical Center was destroyed in a tornado May 20 2013.

Matt Lauer and Al Roker moved a few blocks from where they first were to show more of the destruction that was wrought on Moore, Oklahoma in May 20th’s EF4 tornado. They stood in what was once the Moore Medical Center, which, even for how large and well-built a building it is, is still in shambles—windows smashed, concrete walls hanging by their rebar, and destruction all around the perimeter. The alarms inside are still periodically going off.

An overturned SUV, which had been picked up and deposited in front of the Medical Center from an unknown location, was marked with a red “X” by search and rescuers to show other search and rescue teams that they had already searched the vehicle for survivors. This was just one car among a multitude of cars that were parked in front of the medical center yesterday, all marked by a red “X.” The smell of gas hung in the air from the many leaking fuel tanks.

To further represent the power of the tornado, Matt and Al showed a telephone pole that was near the Medical Center, which had a piece of solid metal wrapped around it like a spring coil. Standing it a soggy field, you could see where deep gouges had been made in the ground, no doubt by some passing piece of heavy debris. Nearby trees had been stripped of not only all of their foliage, but their bark as well.

The Moore, Oklahoma Medical Center did have patients in it yesterday when the storm struck, one of which was in labor, who were all evacuated by ambulances after the storm struck.