What would you do if your child was being bullied and the administration at the school seemed to be looking the other way? Matthew Bent was put in this position when his son Shiloh came home from school one day and told his father he was being bullied at school. Bent said he didn’t know what to do at first but it was even harder just hearing his son tell him he had been bullied at all.

He wondered what he could do as a parent. Then it came to him – Facebook. Bent posted a picture of himself with his son holding a sign that read, “I stand behind my son in the fight against bullying! Please “like” and “share” to send a message loud and clear that bullying needs to stop now. Tell school districts that protecting bullies by turning a blind eye is wrong.” 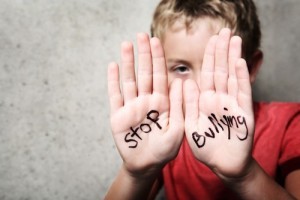 The Today Show talked with Michael Bent and his son about how they used Facebook to fight bullying at school after the administration turned a blind eye.

The Facebook post went viral within days. Over half a million people liked and shared the photo with friends. Bent said he has been getting emails from people all over the world about how they stand behind him in the fight against bullying.

“People are being bullied all the time,” Bent said. “Someone is getting bullied right now somewhere in the world.”

Bent’s son told the Today Show the hardest part was telling his father about the bullying. He didn’t know if what was being done to him was considered bullying by his father or the school (they didn’t mention it on the Today Show but Bent’s son had been body slammed at school and the police and administration did nothing to punish the bully). He also said when his father came to him with the idea of using Facebook, he was scared at first. He didn’t want the bullying to be worse because of the Facebook post.

He said the first day at school after the post was put up on the internet, kids at school were asking Bent’s son why he would let his father put up the picture on Facebook. But some of the children in the school understood. They had been victims of bullying and they wanted it to stop as well. He said within a few days everyone in school knew about the post and the bullying has decreased since the Facebook post.

Bent’s son had some advice for the Today Show audience. He reminded everyone that less and less bullying will happen if people stand up against the bullies. He also thanked his friends for helping him through such tough times. Bent also had some advice. He said the first thing he told his son was to turn his back on bullies and walk away and if the administration does nothing about the bullying, he said it is in the hands of parents to stop the bullies.

“Make sure your kids know it is okay to talk with you about bullying,” Bent said.