A curious picture went viral on the internet a few weeks ago depicting an elderly man sitting with an elderly woman using flash cards to teach the woman how to read again. Matthew Ballestero took the picture of the couple and put it on his Facebook with a small caption about the couple. Within five hours, 50,000 people had seen the picture. As of today, two million people have seen it. The Today Show wanted to know more about the picture so they tracked down the couple and found an amazing love story behind the picture. 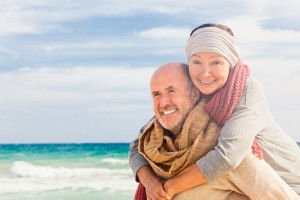 The Today Show talked to an elderly man who spends six days a week teaching his 82-year-old girlfriend to read again after suffering bleeding in her brain.

The couple is Linda Alexander, 82, and her boyfriend Don Allen. They met 11 years ago when they were a happy, fun couple who enjoyed spending time with each other and traveling together, but that all changed five years ago when Alexander was admitted to the hospital with bleeding in her brain.

After three surgeries and a stroke, Alexander was a changed woman. She was partially paralyzed, her memory had been affected and she could not speak for some time, only being able to say ‘I love you.’ Allen said he remembers when she was in the hospital and he can remember her telling everyone ‘I love you.’

But the story does not end there. Six days a week, Allen picks up his girlfriend and goes to a local Starbucks where he uses flashcards to teach her to read again. He is patient and calm with her as he goes over the alphabet again and again. Alexander doesn’t mind either. She said she never gets frustrated with herself or with Allen. She is determined to get back to her normal life, she said, to get back her ability drive and read again.

Allen also takes her to the gym three days a week to help her work out, hoping to slow the semi-paralisis on the left side of his girlfriend’s body.

But it isn’t just about work. He also takes her to a romantic lunch every day, something to lift her spirits and show his love for her. At the end of the day Linda Alexander can still sum up her entire life with just three words: I love you.