Legendary entertainer Liza Minnelli stopped by the Today Show this morning to chat with hosts Al Roker, Natalie Morales, and Willie Geist. On the heels of her 67th birthday, the star looked better than ever dressed in black with ornate gold earrings. 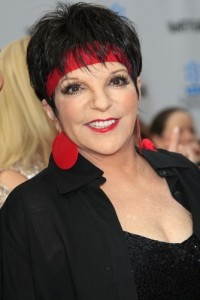 While discussing the recent comment made by President Obama about Kamala Harris, Attorney General of California, that she was the “best-looking” attorney general, Liza said, “it’s a normal thing for a man to say.”

There has been some criticism directed towards President Obama for the comment, which a lot of people say was a sexist remark. Natalie, Al, and Willie wondered if the backlash to the comment is overblown, considering the harmless nature of the comment.

Always positive, Liza said she thinks the comment was “swell,” and went on to say Harris most likely appreciated the compliment. She said that when Harris gets up in the morning and puts on her makeup and does her hair, she wants someone to notice, just like any other woman.

The subject matter turned sober as the news of Roger Ebert’s death was brought up. Ebert passed away Thursday at the age of 70, after a long battle with cancer. Ebert began reviewing movies as one part of Siskel and Ebert at the Movies in 1975.

Ebert was known for his blunt criticisms of films, so the Today Show hosts shared his review of the film Ishtar, in which Ebert said, “It’s not funny, it’s not smart and it’s interesting only in the way a traffic accident is interesting.”

Al added that he always checked to see what Ebert thought of a movie before going to see it.

Liza Minnelli is known for her impressive set of pipes; it’s what got her famous in the first place. Natalie Morales of Today? Not so much. As a montage of Natalie trying to sing played for everyone to see, Al and Willie couldn’t stop laughing.

While Natalie’s skills leave something to be desired, she was certainly very brave to sing in front of a crowd. Trying not to take herself too seriously, Natalie sang “Take Me Out To the Ball Game” at Liza’s request. The camera cut to Al’s face several times to reveal a look somewhere between secondhand embarrassment and incredulity.

Today Show: Take Me Out To The Ballgame

While Willie and Al poked fun at Natalie, Liza offered a lesson: “Think about what you’re singing and why you’re singing, and act it.” After this piece of advice, Natalie sang to Liza like they were having a conversation.

“Take me out to the ball game,” Natalie sang, and Liza replied that, no, she didn’t want to go. The back and forth went on like this throughout the song as Liza coaxed enthusiasm out of Natalie. The singing didn’t necessarily get better, but she definitely was more confident. Upon finishing, the crew, hosts, and Liza cheered.