The Boston Marathon is more than just a race for Boston. It takes place on Patriot’s Day, a day to remember the “shot heard ’round the world,” the shot that started the Revolutionary War. It is also one of the most challenging marathons in the world, oftentimes praised for the challenging hills and enthusiastic crowds that line the streets.

One woman who was in the crowd of people near the explosion said she was “terrified” and couldn’t stop herself from thinking there were going to be more bombs going off in the city.

For the past 30 years of the Boston Marathon, which has been going on annually for the past 117 years, runners have turned to Dick and Rick Hoyt, a father-son team, for inspiration as Dick pushes his disabled son to the finish line of the race. Now, more than ever, Boston has been looking towards these two marathoners to find inspiration to move through this tragedy. 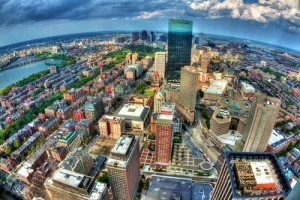 The Today Show talked with experts about the importance of Patriot’s Day which coincides with the Boston Marathon and the history of violence in the US in April.

The Today Show talked with New York Daily New’s reporter Mike Lupica about his thoughts on the Boston Marathon bombing.

He said anyone who has ever been to the Boston Marathon knows how personal the marathon is to every person in attendance, marathoner and bystanders alike. It is a celebration of everything good in the world. You hear cheers all around the city after the race starts. Except yesterday.

“People were running away from the marathon,” Lupica said. “It was the most chilling and sad thing I have ever seen.”

“Instead of running toward the finish lines, they were running away,” Lupica said.

Today Show: History Of Violence In US During April

April seems to have always been a violent month in American history. Over the past 20 years, America has seen some of the worst terrorists attacks happen in the month of April, making some people wonder if the Boston Marathon bombing was a coincidence or if it was planned to happen the same day as the Virginia Tech Massacre.

Other attacks in April have included the Columbine shooting on April 20 1999 and the Oklahoma City bombing by Timothy McVeigh in 1995. Also on April 19 1993, the 51 day stand off between police and cult leader David Koresh ended in a deadly battle that left 76 people dead.