Today: Is Skinvertising Your Company a Good Idea?

Natalie Morales was on assignment, so Willie Geist, Al Roker and Tamron Hall all sat down for the Take 3 May 2 2013. There’s a big New York company called Rapid Realty offering their employees a 15 percent raise. The catch? They have to get a tattoo of the company’s logo somewhere on their body. So far, 40 percent of employees have taken the company up on its offer.

Tamron Hall said the likelihood of working at one place forever isn’t good. She didn’t think it was a great idea to get a company logo permanently on your body. One of the employee’s pictures they showed had the tattoo on her hand and Tamron Hall wondered how that young woman would get a job anywhere else. 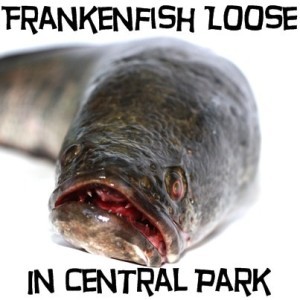 This is the Frankenfish, otherwise known as the Snakehead fish, giving his best smile for the camera.

She added that she has been trying to get rid of a tattoo for years. She said the darker your skin, the harder it is to remove. Willie Geist was surprised she had “ink.” “That’s right,” Tamron Hall said, throwing her hand up with a peace sign. Al Roker asked her if she’d just thrown up a gang sign.

“It’s called peace. It’s a peace sign. It means I’m hip,” Tamron Hall said. Al Roker said if she has to tell us she’s hip, it probably means she’s not hip. But then again, Al Roker was the one who thought a peace sign was a gang sign.

Kathie Lee and Hoda have taken Charleston, South Carolina by storm. They’re doing their show from there today, outdoors, in front of a gigantic crowd. “Not since the Union army rolled in there has a city braced for something like this,” Willie Geist said. Too soon?

Kathie Lee and Hoda revealed they had finally figured out what Charleston stood for. They showed a poster with the names of several wines, highlighting a letter in particular that spelled Charleston, including:  Cabernet, SHiraz, MArbec, ChaRdonnay, RiesLing, MErlot, MarSala, PinoT, NOir, SauvigNon Blanc. They said they chose Charleston, South Carolina because the food is great and the people are very friendly.

Have you heard about the Frankenfish, the most terrifying fish in the world? It’s supposedly in the lake at Central Park in New York City. It can live for a time outside of the water and it eats whatever it sees. It has rows of teeth to help it eat. “As a father of a three-year-old who spends a lot of time around those waters in Central Park, I’m concerned,” Willie Geist said. The video of the fish is seriously terrifying.

Once again, the fish has the ability to live out of the water for days. Officials say that if you see the fish, you’re supposed to catch it, kill it, freeze it and then contact authorities. They don’t recommend covering it in garlic and crucifixes, but you might want to. The fish is horrifying.