Tickets were sold out in minutes when they went live online. People are showing up by the thousands. No, I’m not talking about a concert, though one attendee did compare it to getting tickets to see the Rolling Stones. I’m talking about Baconfest Chicago 2013, a day where aficionados and enthusiasts collect in appreciation of one of our nation’s most popular meats.

Some of Chicago’s top chefs put their culinary chops to the test to compete for the coveted “Golden Rasher,” awarded to the chef that comes correct with the most unique and tasty bacon utilization.

Today Show: Bacon Cupcakes Just One Of The Many Bacon Flavors 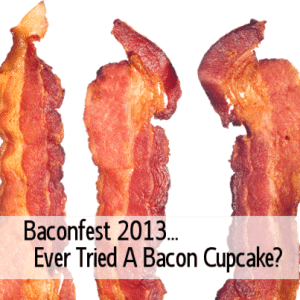 If you’ve ever wanted to try a bacon cupcake, Baconfest Chicago 2013 is the place to be.

There were bacon cupcakes, bacon hamburgers, and bacon gourmet among the various bacon-oriented dishes on display at the convention. Knowing that there are bacon-flavored cupcakes should either help you restore your faith in humanity or see a little more of it slip away like it does when you find out how popular Honey Boo Boo is – it really comes down to your perspective.

This should really come as no surprise, though, as they state pretty clearly in their manifesto that they “…accept that every bacon experience may contain the seed of greatness, and so never refuse to try a new bacon combination, and “Although our minds may rebel, our palates are the final judge.”

The founders of the event think that there are a lot of associations to happiness, comfort, and nostalgia with people, and this is where the love of bacon comes from.

In this single-day even, nearly three tons of bacon are served, but it is all for a good cause. From the proceeds, $50,000 are donated to the Chicago Food Depository to help feed to homeless. One Baconfest goer described the event’s message as “peace, love, and bacon.” Since Baconfest started in 2009, it has helped raise over $85,000.