Audrey Hepburn is still a figure of American elegance and beauty almost 20 years after her death. But did people really know her beneath her good looks and beneath her external beauty? As much as people would like to believe they do, most probably don’t know she never thought of herself as being beautiful. 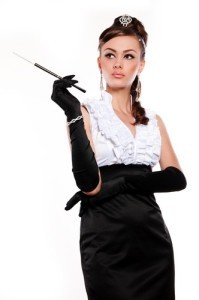 The Today Show looked at the life of Audrey Hepburn, talked with Hepburn’s son Luca Dotti about Audrey in Rome and revealed she didn’t find herself pretty.

We watched her go shopping at Tiffany’s and we remember when she left for Rome, but a new article in Vanity Fair, told to a reporter by her son, reveals much about her life that was kept out of the public eye after she left Hollywood behind. Hepburn’s son, Luca Dotti, said his mother moved to Rome because she wanted to get away from the cameras for a while and she wanted to focus on her family more.

But she couldn’t leave fame behind. She was continually photographed around town with her dog, Mr. Famous, and her straw basket. Dotti even found her to have been photographer more in Rome than he actually remembered. When he was researching for his book Audrey in Rome, he began searching through files of photos kept by different newspapers in Rome and he found 1,000s of photos he never he knew existed.

Dotti went on to say the photos really represented his mother. They were the reason she always looked stunning. She wanted to look good for the cameras, something he talks about in the book, which he explains as shining a light on her years in Rome, in the area between her public and private life. He also said his mother was not only about external beauty. She focused on her internal beauty, which is evident in her humanitarian efforts in the later years of her life.

But the most stunning revelation in the book is that Audrey Hepburn didn’t find herself to be beautiful, saying she was just a “good mixture of defects.”