Amy Coplin, the Georgia woman who almost lost her life to a rare flesh-eating disease last year after she contracted the condition in a zip-lining accident, has made some very large strides in her recovery with a little help. Touch Bionics, in Columbus, Ohio, is making Amy Coplin the first female to use prosthetic hands on both arms. The hands are fully functioning, and it will just take a little time for her to acclimate to the ins and outs of using them. 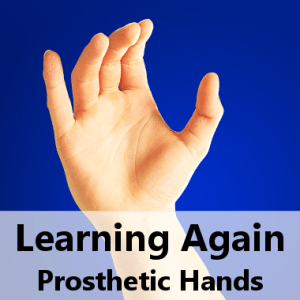 She will have to relearn a lot of basic skills, like squeezing the handle of a spray bottle, but after a few days, Amy Coplin is already writing her name, styling her hair, and putting on jewelry, which are all promising signs. Though opening a bag of Skittles usually ends in a fountain of the candies flying all over the room, everything will come with practice.

Eventually, it won’t be such a strange thing to do something as simple as shaking someone’s hand. Amy Coplin is most looking forward to cooking and cleaning with these new hands, something that might strike you as strange, but she says that she is very OCD about the cleanliness of her house, so it makes sense.

As it turns out, Amy is making all of this look pretty easy. A representative from Touch Bionics said that Amy has accomplished things in a few days that it has taken other users of these devices months to master. Using an app on her iPad, she can toggle between 24 different grip modes, which probably helps.

The hands that Amy has are usually $100,000 piece, but since Amy has learned so quickly how to use these hands, she will now be serving as a spokesperson for the company, so she will be getting hers for free.

What are Amy’s plans for the future? She is currently working on her master’s in psychology, and after that, plans to get yet another master’s degree in social work.

She doesn’t feel like the same person anymore, almost as if she died a year ago and was born again a different person. With such a drastic change occurring in her life, it’s not surprising to hear that.