Willie Geist, Natalie Morales and Al Roker sat down with Savannah Guthrie for the Take 3 May 13 2013. Apparently, someone told Savannah Guthrie she couldn’t be on Take 3 until she could do something newsworthy. Over the weekend, her boyfriend, Democrat political and communications consultant Michael Feldman, proposed to her.

She said that her fiance is a great guy because he puts up with her, even though she’s “no picnic” sometimes. She said that all the signs of a proposal were there, but she didn’t notice them. He took her to the beach at sunset and opened a bottle of champagne.

“And I’m like, why don’t we go to the bar?” she said. “I am paid for my powers of observation and perception. They were not there in that moment.” But she said she was really shocked when he gave her the ring and she said yes. “This was the right time for us,” she said. 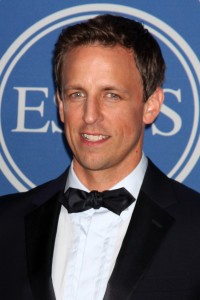 Seth Meyers will replace Jimmy Fallon as the host of Late Night when Jimmy Fallon moves over to The Tonight Show. Late Night has actually only ever had three hosts, including David Letterman, Conan O’Brien and Jimmy Fallon, making Seth Meyers the fourth. Natalie Morales wondered who will take over Weekend Update on Saturday Night Live, which is currently hosted by Seth Meyers. He’s also one of the head writers for the show.

The FAA may revise its rules on turning off electronic devices on airplanes. In the meanwhile, a new poll shows that 30 percent of people forget to turn off devices on the takeoffs and landings. Natalie Morales said she’s had that happen before. Al Roker joked that it was him calling her and that the ringtone was the “Boom Chica Wow Wow” song.

The Minnesota State Senate is set to vote today on legalizing same-sex marriage in the state. If passed, the state’s Democrat governor has agreed to sign it. Final passage would make Minnesota the 12th state to allow same-sex couples to wed.

Iron Man 3 took the box office by storm this weekend, taking the top spot with $72.5 million, followed by The Great Gatsby with $51.1 million and Pain & Gain trailing far behind in third place with $5 million.