Home > Today Show > Today Show Music
When you buy through our links, we may earn an affiliate commission. As an Amazon Associate we earn from qualifying purchases. Learn more.

17-year-old pop star Austin Mahone got his start in 2011, when he saw a rise in popularity thanks to his YouTube videos of him covering popular songs. Since then, he has climbed his way to full pop-star superstardom, and has his debut album coming out later this year, What About Love. He came on Today Show June 10 2013 to perform a few of his songs. 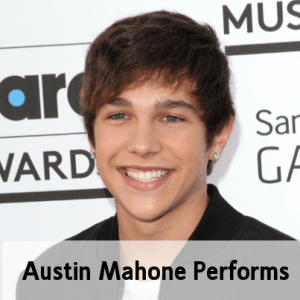 If you have ever seen a pop star perform, then Austin Mahone’s performance of his song “What About Love” probably brought no surprises for you. As a pop star, he had all the requisite dance moves, flashing lights, smoke machines, and other set effects to spritz it all up. If you like Justin Beiber, chances are you would have liked this performance, as well.

Today Show: Austin Mahone On His Rise To Stardom

After performing “What About Love,” Austin Mahone gave people who want to rise to stardom via YouTube a little advice. He was posting videos to YouTube and his other social networks every week, and the more videos he posted, the more followers and subscribers he got, which led to him blowing up.

As for the early days of fame, Austin Mahone said that he loves travelling all around and performing, but wished that he could see his family and friends more. As for comparisons to Justin Beiber, he appreciated the comparison, but said that he also wanted people to know him as his own artist, as well.

Austin Mahone’s last performance was of song “Say Somethin’,” which was much more toned down than “What About Love.” With nothing but an acoustic guitar, he walked off the set and out into the square, where countless teenie boppers were of course going wild over him. I’m surprised that he wasn’t blinded by all of the braces in the crowd.