The Today Show put a call out to fans to find amazing children with amazing talents. Thousands and thousands of people sent in submissions for children who are talented puppeteers, painters, athletes, dancers and more. From these thousands of submissions the Today Show picked four winners whose talents on the piano, in the kitchen, on canvas and on the runway were more then enough to impression.

Maria Sarah, 14, from Indiana, was one of the four people chosen from the thousands of people who sent in videos. Maria said she has been playing music since she was only a few years old, since then mastering the guitar, mandolin and piano while writing and performing her own songs.

She told Matt Lauer she doesn’t get too nervous when she is performing but she looked a little nervous on the Today Show. She said she has been driving to Nashville with her parents once a month to record her own album and to take voice lessons because she one day hopes she can perform music that will make other people “happy.” 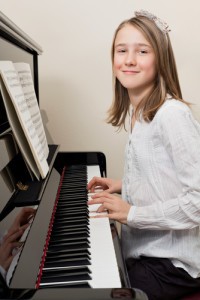 The Today Show picked their final four stars of tomorrow and talked with two of them, 10-year-old painter Joshua Chase and 14-year-old musician Maria Sarah.

She performed her own song, “Broken Dreams,” while on the Today Show. The song is about the tsunami in Japan last year. The song was actually very emotional for a 14-year-old. Sarah sang about a woman trapped in a world of pain and trying to pick up her life and fix the broken dreams the tsunami had taken from her.

Joshua Chase might have found his gift at a young age, but it took him almost the entire 10 years he has been alive to even begin using it. Chase, a 10-year-old painter from Massachusetts, said he only started painting about nine months ago. He said he always loved arts and crafts and one day he decided to try his hand at painting. As long as he didn’t paint anywhere with carpet, he said his mother was fine with his new hobby.

And in such a short time in the art world, Chase has found some unique advice since starting.

“For painting, with the brushstrokes, you have to pretend you are giant reaching in,” he said of how he paints.

“My grandpa thought it was a paint by numbers,” Chase said.

Since Chase got his inspiration for painting from Ray Ellis, the Today Show set up a meeting between the two painters, one only 10-years-old and the other still painting prolifically at the age of 91.

After getting a few tips about being a better artist, Chase told the Today Show thank you and said he is going to continue using Ray Ellis as inspiration for his art.