Stephen King just released a new book, Joyland, a crime novel set in a theme park, and he has wanted to write this book for over 20 years, ever since it started as an image in his head.

He believes that books aren’t built things, but found things, and he had this image of a little boy in a wheelchair that was flying a kite that wouldn’t go away. He knew that this meant something, but wasn’t quite sure what it was, so he let it develop a little bit more in his head, and eventually, an amusement park appeared down the beach from where he was flying the kite, and that’s when he started writing. He wondered why he hadn’t done it sooner, because themes parks are frightening places.

Today Show: History Of The Shining 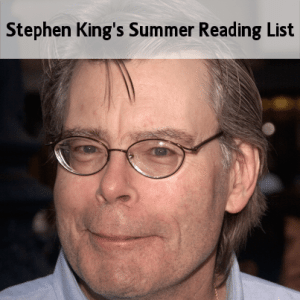 Stephen King’s new book Joyland will make for the perfect summer read, but what is the author reading this Summer?

The idea for this book was actually going to be used on one of Stephen King’s more famous novels, The Shining. Instead of The Overlook Hotel, the book was going to take place in an amusement park and be called Dark Shining. Realizing that it would be rather difficult to trap anyone in an amusement park, he switched gears and turned the setting into a hotel, and The Shining as we know it was born.

Stephen King said that the way he develops stories is much like removing a fossil from the sand. You try to dust as much of the sand away from the fossil and get as much of the original piece out intact. If you get it all out, you win, but there are times where pieces break off and you have to improvise.

His book The Green Mile is an example of when he found himself writing a book and having no idea where he was going next with it.

Joyland is Stephen King’s 44th book, and he said that without writing, he would be dead. For Stephen, the worlds that he crafts in his books are an escape hatch. To tell someone why he wrote something in any book of his is difficult because he is never really on planet Earth when he’s writing. He loves it so much that he would do it for free (don’t tell anyone).

Joyland is not being released in e-book format, and Stephen King said that this was a deliberate choice. He recalls being a kid and going to the store to buy books off of a wire rack, and he was hoping that he could perhaps get people back in the bookstores by only releasing Joyland as a paperback that people have to go out and buy.

Stephen King has conquered the television with Rose Red, the written word with Joyland and countless other novels, movies with It, and now he will be going after the theater with a musical called Ghost Brothers Of Darkland County.

To craft the soundtrack for the musical, King is working with John Mellencamp and T-Bone Burnett. The soundtrack is going to release tomorrow, and this fall, there is going to be a 20-city tour of the production.

Being an author, Stephen King can obviously make some good suggestions for summer reading, and he had three for us. Both of his sons publish novels, so their books made up two of his suggestions with Joe Hill’s Nos4a2, which Stephen said was so scary you have to go hide in your closet (where could he have possibly been influenced to write horror?), and Owen King’s Double Feature, a book that lands on the other end of the spectrum as a comedic look at the worst movie-making experience of all time. Last up was Silken Prey by John Sandford, a novel about a politician gone bad.