Grayson Clamp experienced the most magical moment of his young life this week. The three-year-old deaf boy got to hear his father’s voice for the first time thanks to medical science. He sat, playing with a little book as the hearing aid was activated. As soon as it was on, his father said, “Daddy loves you.” Grayson’s eyes lit up and his jaw dropped. Not only was it the sweetest phrase, but he could hear. He signed to his father and that he could hear him. 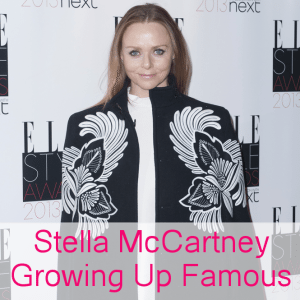 Chelsea Clinton interviewed Stella McCartney about growing up with a famous father. She said that she was naive starting out in fashion. Featureflash / Shutterstock.com

Grayson had a rocky start to life. The smiling little blonde boy had open heart surgery at one month old, lost sight in one eye and has been deaf since birth. His adoptive parents went to great lengths to help him, and earlier this year he became the first child to have a device implanted surgically into the base of his brain. Now Grayson will start speech therapy and interpreting words. His parents said they look forward to the day that he can talk with them and his best friend, little bro Ethan.

Growing up with a famous father, Stella McCartney knew she too was destined for greatness. At age 12, she made her first garment – an ultra suede jacket with salmon pink lining. Stella’s father, Paul McCartney, knew from there she was going to be a designer. Now, Stella McCartney fashions are coveted for their girly nature, perfect fits, and eco-friendly styling.

In college, Stella McCartney interned and apprenticed with her father’s tailor. She said it took three long years to learn the proper technique for sewing sleeves, but they were well worth it. She said that feeling of putting on a mans jacket is one of power and she loves the masculine look. Her graduation collection was modeled by Naomi Watts and Kate Moss and then picked up by Bergdorf Goodman. At 25, Stella became creative director at Chloe and famous designer Karl Lagerfeld was not as supportive of the decision.

“I think they should have taken a big name,” he told Women’s Wear Daily. “They did – but in music, not fashion.”

McCartney said she was naive to think that no one would notice her. Thanks to her world renown parent, Stella was under a microscope. Chelsea Clinton told Stella that she sympathizes.