Al Roker sat down with Emmys host Seth Meyers. Seth Meyers has had a big year. He got married, started hosting Late Night, and now he’s hosting the Emmys.

“Yeah, it’s kind of over after this. Come October, it’s going to be a sad situation with me. Just nothing ahead of me on the calendar. I guess we’ll have kids,” he said. 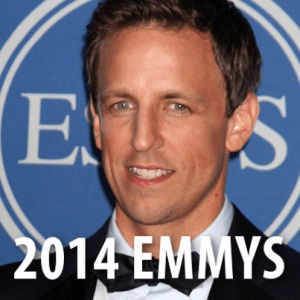 Seth Meyers will be hosting the Emmys and he came by Today Show to talk about his success, whether there will be a musical number at the Emmys, and the Robin Williams tribute. (Helga Esteb / Shutterstock.com)

Seth Meyers said that he would’ve only regretted it if he turned down the chance to host the Emmys when Al Roker asked if he thought about it. Seth Meyers said that he’s focused on avoiding creating a train wreck. He said people talk more about the Emmys the two months leading up to it than the day after, so he’s hoping that he doesn’t do something that makes people talk about it still a week later.

When Al Roker asked if he was doing any musical routines, Seth said he can’t sing or dance but there will be something musical in the show. He just won’t be a part of it. He also guaranteed that he won’t be twerking.

Today Show: Who Is Seth Meyers Rooting For?

Seth Meyers said he only met Robin Williams once, but he said it has been moving to hear the stories about what a kind soul he was. He also said that the Emmys always has a great way of honoring people in Hollywood who pass away. “I think they’ll go the extra mile for Robin this year,” he said.

Last year at the Emmys, Robin Williams paid tribute to his mentor Jonathan Winters. This year, his good friend Billy Crystal will pay him tribute.

Al Roker wondered if Seth had any ritual superstitions or good luck tricks. Seth said he didn’t. He was a Boston Red Sox fan for a long time and he always tried a lot of weird good luck things to get them to win. But when they finally won the World Series, he realized there’s no jinxes or superstitions that mattered to him. So he’s just trying to focus.

Al Roker said he wouldn’t wish him good luck then, just to have a good show.