Musician Jack Johnson has performed all over the world, but he calls Hawaii not only home, but the place where he finds inspiration for his music. He has recorded every album except for his very first one in his Hawaii recording studio. 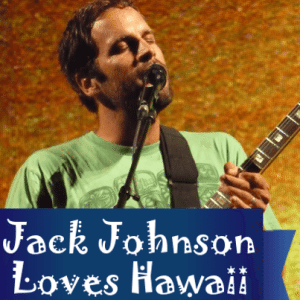 Jack Johnson love Hawaii, and he tells us why. (Daniel DeSlover / Shutterstock.com)

Jack Johnson didn’t just up and decide to move to Hawaii one day, though. He was born and raised here, and now, he and his wife Kim are raising a family of their own here as well. Jack says that you pretty much spend all of your time outside here, and just need a house to sleep in.

Jack Johnson thinks that time in nature is time well spent. His mission is to protect the land, protect the ocean, and work with the community to keep Hawaii a beautiful place. To carry out his objective, Jack has started the Kokua Hawaii Foundation.

The Kokua Hawaii Foundation supports environmental education in Hawaii’s schools and communities. Jack gives a lot of credit to his wife for getting him to focus on more nature-oriented projects. It is now entrenched in the local schools thanks to their efforts.

Beyond Kokua Hawaii Foundation, Jack Johnson has another place he loves—Ma’o farms. Students come here to harvest food for the town restaurants, and gain scholarships to go to college while they do it. The food goes literally farm to table in a day’s time.

Jake Shimabukuro, known as the “Jimmy Hendrix of the ukulele” closed out this hour of the show with a performance. He certainly lived up to his namesake, banging out some upbeat tunes on his instrument.