Matt Lauer headed down to Dallas, Texas for the opening of the George W. Bush Presidential Center, located on Southern Methodist University’s Campus. Lauer sat down to talk with Bush’s wife Laura, mother Barbara, and twin daughters, Jenna and Barbara, about the center and living in the White House. 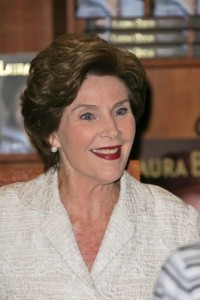 Lauer was quick to point out that this is the first time three generations of Bush women have been interviewed on television together. Barbara Bush, George’s mother, was very happy about the opening of the center.

Jenna Bush Hager just gave birth to a baby girl named Mila two weeks ago, but she appeared alongside her family on Today. The whole family was very excited about the new arrival and Barbara’s status as a great grandmother. Barbara has yet to meet her great granddaughter, while Jenna’s twin Barbara was there for the birth of her niece.

The George W. Bush Presidential Center has 13,000 artifacts related to the former president, including baseball memorabilia, one of Laura’s dresses and even baby pictures. Jenna talked about how proud she was for her father’s service to the country and that “we know him as our dad.” His mother added that the center celebrates him as a leader and relives him as a president.

Today: Life in the White House

Lauer asked the women a question all of America is dying to know: what is life in the White House like? The elder Barbara was very blunt, stating, “I don’t miss a darn thing.” She made a small addendum, adding that she did miss breakfast in bed. Laura missed having a chef. Jenna said she missed the people who worked there because they were close to her and her family.

Barbara discussed her husband, George H.W. Bush’s health. He was released from the hospital in January and Barbara said he’s doing great, even though his “legs don’t work.” Despite his health, he is proud of his son.

Lauer asked if there would be another Bush in the White House, specifically Barbara’s youngest son Jeb Bush. The family matriarch, once again being extremely forward, said she didn’t want to see her son run and that there were other qualified people. She stated, “We’ve had enough Bushes.”