Do you only have about $600 but you want to renovate your bedroom with something unique and stylish that no one else in the world has? Well, if you have some pennies laying around you can follow the same route as Ryan Lang and his girlfriend Emily Belldon. The Chicago couple wanted to renovate the floor in their bedroom and decided to do it themselves by gluing 60,000 pennies to the floor. 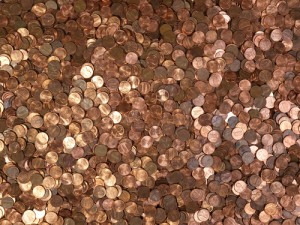 The Today Show talked with a couple in Chicago who glued 60,000 individual pennies to their bedroom floor instead of paying for a new renovation.

Lang said there was not really an epiphany when they came up with the idea. They both wanted to renovate their bedroom and often joked about spreading the pennies in their coin jar all around the floor. After a while, the joking turned to reality as Lang started gluing pennies to the couple’s bedroom floor.

The couple estimates it took about 130 hours over the course of about five months to get all the pennies glued on the floor. Although gluing the pennies was admittedly the worst part, the couple said it was also awkward going to the bank to ask for $50 in pennies. Luckily, they were able to avoid some stares when their friends began bringing them pennies for their remodeling project.

Even some of the pennies are as unique as the floor, the couple found out. They have an old penny made out of steel as well as a penny from 1873 with a picture of an Indian woman on the front. Lang said there are numerous threads and blogs debating the cost of those pennies, but the couple has no idea what they are worth. “We are just excited to have the pennies,” Lang said. “They have to be worth the price of actually remodeling the floor, so it’s a good trade off.”

The reason the couple loves the floor most isn’t the uniqueness of it though. They said they like to think about where all the pennies have been and all the people who have used them to buy items all over the world.