Titus is a two-year-old who is already destined for the NBA if he keeps his interest in the sport. A viral video of the little boy recently hit the internet and it is amazing to watch him shoot baskets on any sort of hoop. From regulation sized hoops to tiny basketball hoops for little kids, Titus can make a bucket on any of them.

Joseph, Titus’ father, said he used to lay with his son in bed and they would watch NBA games on his computer. Ever since he has been able to walk, Titus has followed in the footsteps of the players he watched on the computer and has been shooting baskets ever since. Joseph said all his son wants to do is play basketball. 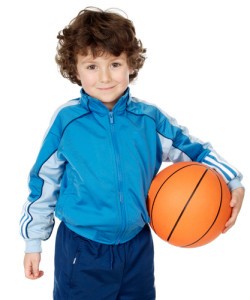 “He always says ‘more hoop,'” Joseph said. You can check out the video of the little basketball star here.

Mike Lupica stopped by the Today Show to talk about his new novel Game Changer Play Maker, a novel about a young boy named Sam who just finished the football season by throwing a game winning touchdown and now he is going into basketball season as the star player. But he soon realizes there is another kid in the next town over who is better than he is and who could beat Sam’s team for the championship.

Lupica said the novel focuses on teamwork, friendship and the love of the game. He said he tried to bring in some of the aspects he uses when he coaches his own son’s team. He said he always tells his team to have fun when they play the game because any adult watching in the stands would trade their lives in a second to be able to play a basketball game with their friends.

Lindsey Vonn, an Olympic skier, recently took a terrible spill during a skiing competition, tearing her ACL and breaking her tibia. Even with such severe injuries, Vonn said she is going to be ready for the 2014 Winter Olympics in Sochi. Can she really make it back though?

Lupica pointed out how Adrian Peterson came back so quickly after his injury and it has really shown everyone a new template on how long an injury can set you back. He added that Vonn was a true competitor and she was going to push herself to get healthy faster, regardless of the sponsors or endorsement deals, because she wants the gold, not the money.