Matt Damon‘s Elysium is being called one of the most provocative films of the summer, and the actor came on Today Show to tell us why. Matt Damon wasn’t the first person chosen for the starring role in the film, but he said that asking who saw a script before you is a lot like asking a girlfriend about her exes. It was revealed, however, that Eminem was one of the earlier picks for the starring role.

Elysium is a very gritty movie, and this is thanks in part to the director at the helm of the movie, Neill Blomkamp, who was also responsible for District 9. Matt Damon thinks Neil’s take on science fiction is one of the most unique out there right now, and this is part of what drove him to the film. 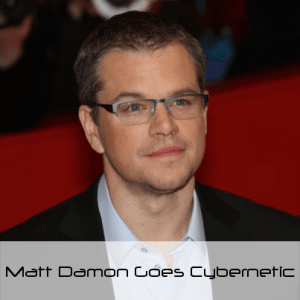 Matt Damon told us about his character’s cybernetic implants in Elysium (cinemafestival / Shutterstock.com)

Elysium takes place 150 years in the future, where Earth has become a third-world planet. The privileged parts of the populations  have moved onto a space station called Elysium that floats high above the Earth, while the average citizens are still stuck on terra firma, aspiring to get there, trying to eke out a meager existence on the planet.

Matt Damon’s character, Max, undergoes a transformation in more than one way in the movie. After an accident at work leaves Max irradiated with five days to live, his only chance is to reach Elysium, where just about any ailment can be cured. Fitted with cybernetic implants, Max begins to take incredible chances and see incredible results.

Elysium is being called a call to action by some who see eerie parallels between a future in which earth is a wasteland and the current state of the environment, but Matt Damon said that Neil Blomkamp would likely go crazy if he heard that. To Matt, Neil just simply set out to create the most entertaining sci-fi film that he can, first and foremost.

The last role Matt Damon took on was as Scott Thorson, Liberace’s lover, in Behind The Candelabra. It looks like Matt is having a lot of fun just exploring all sorts of different roles. It’s not totally random, though. Matt chooses his roles based more on the director than the movie. You place a big bet on the director when you decide to work on a project.

It was mentioned earlier in the day that Matt Damon would be moving out to California, and reason for this is to focus on a production company he and Ben Affleck own, and this partially helps the two develop some really good projects together, and even get ahold of the movie rights to books before anyone else.

Another friend of Matt Damon’s is Brad Pitt, who, according to Matt is jealous of him. This isn’t really all that bad, though. The off-hand remark in from his interview with Esquire Magazine was only referring to the fact that Matt can walk his kids in New York without being hounded by photographers.