Today Show: John Krasinski On The Last Season of The Office

Knowing this show was something special from episode two, John Krasinski had plenty to say about his character Jim Halpert from the popular comedy sitcom The Office, which is coming to a close. John was very humble about his contribution to the show, chalking much of his success up to the writers: “I owe everything to to writers,” he said “Greg Daniels is a total genius.” 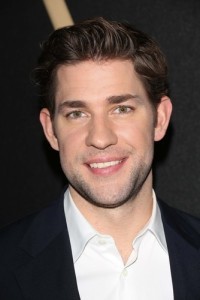 John Krasinski spoke on the last season of The Office. (s_bukley / Shutterstock.com)

Being one half of the most talked about couples on the show, Jim and Pam, he credited much of the chemistry between the two characters to the writers. “It was always about ‘what do people go through?’ rather than what’s good for ratings?’ and ‘what would be great for drama?'” Many fans have told Jim that some of their relationships echo that of Jim and Pam’s on the show.

To celebrate the lineage of The Office, the cast has been on a bit of a victory tour. There was a parade in Scranton, Pennsylvania, the area of the state in which the show is set, and people came from as far as Brazil to see the cast off. “It was bar none the most surreal experience I have ever been a part of,” said John.

You can catch a special one hour episode of The Office this Thursday at 9/8c and the finale on May 16. Don’t miss it!

Dr. Nancy Snyderman, the NBC News Chief Medical Editor, came in to talk about a neurosurgeon who believes that the next big advance in the medical field will not come from a technological breakthrough, but a return to the basics of human communication.

Every day, doctors and nurses have to speak with their patients, and good rapport can save lives. So, where did Dr. Allen Hamilton bring his students to teach them the basics of human communication? A horse corral. Yup.

Dr. Allen has used his horses to teach students how to communicate with patients in a way that is comforting. It started when he was in a hurry one day, and had a patient scream because he and his staff burst into a room and he thought to himself, “Boy, I never would have done that if that was a horse.”

Horses, being easily spooked, are perfect specimens on which to train a gentle touch. Having wished he would have learned these basics sooner, Dr. Allen is determined to make an impact on his students. He wants to instill confidence and help students overcome fear, and the essence of human on human interaction.