Can Men Have It All? Esquire Magazine Investigates 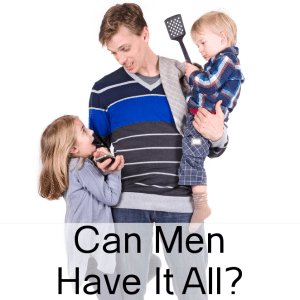 Author and marriage counselor Hal Runkel said that no one can have it all. He encourages men, and women, to make priorities to important relationships.

There’s only so much time in a day, making it almost impossible to get every little thing accomplished. A question as old as time, can women have it all, has been turned on it’s head by this month’s Esquire. A 2013 study shows that men suffer the same achievement struggles as women. Is no one can get their lives together, what does that mean for society?

A Pew research study shows that men today are spending three times more time with their kids and twice as much time doing household chores than 50 years ago. A father of two said he is working on finding a  balance, but finds himself over aspiring to do it all.

He said that their family has a rule: whoever cooks, the other one cleans. That means him doing a lot of the cleaning. He also feels the pressure to provide, even though he and his wife work full-time. The father travels three days a week for work and doesn’t get to see his kids a lot, but it’s a sacrifice he makes to provide.

The author of Screamfree Parenting, Hal Runkel provided his insight. Can anyone really have it all? Do we have to make these sacrifices to be happy? He said that men are programmed to work and be the provider. They struggle to incorporate extras, but put work first.

Runkel said that more and more men are choosing to spend time with their kids. Men are also wanting more appreciation from their spouses on their work. Hal Runkel said that it’s impossible to have everything you want when you want it. He thinks that people should focus on what they want most.

Matt Lauer said that more and more dads are dealing with this. He left the show early this week to see his child’s middle school graduation.