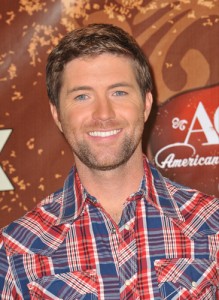 Kathie Lee Gifford and Hoda Kotb were joined by Josh Turner and he sang his hit song “Why Don’t We Just Dance” from his new greatest hits album, Live Across America. (Jaguar PS / Shutterstock.com)

Kathie Lee and Hoda were excited to bring back one of their favorite country crooners. The ladies were joined by Josh Turner and he sang his hit song “Why Don’t We Just Dance” from his new greatest hits album, Live Across America.

Josh Turner has sold more than five million albums and he has had a slew of number one hits. He has released his seventh album, featuring his greatest hits and it is called Live Across America. Kathie Lee said congratulations and it has already debuted in Billboards Top 10. Josh said it was a pleasant surprise and very excited. Hoda asked if it does surprise him and every time he comes to the show something good is happening to him. Josh said that is why he keeps coming back.

Hoda said he is currently on the road. Josh said they are about to go out west for a couple weeks, which they always try to go out west every year and it is always fun and there is always a Cracker Barrel nearby. For his performance, he saing “Why Don’t We Just Dance,” which he dedicated to Hoda!

As stated, this is Josh Turner’s seventh album.  The first was 2003′s Long Black Train, in which the title track is what put Turner on the map in Nashville. In 2005, Josh Turner released Your Man. This album brought him his first two Number One hits: “Your Man” and “Would You Go With Me.”

His 2010 album, Haywire, produced his biggest hit, “Why Don’t We Just Dance”, which went number one, which he sang today. Josh Turner has now combined all those hits onto this new album, called Live Across America.