Kathie Lee and Hoda talked about the Tony Awards that premiered Sunday June 8. The awards were hosted by Hugh Jackman who literally jumped and bounced, leaping forward for at least four minutes straight.

While Hoda thought that was pretty impressive, Kathie Lee and Hoda both agreed their favorite thing was when Hugh Jackman gave a shout-out to the steady-cam operator who he said had an even harder job that him. 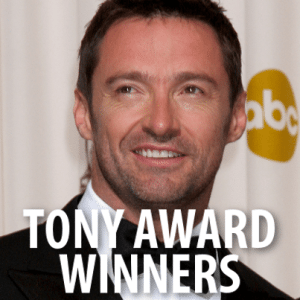 Kathie Lee and Hoda shared some of the winners of the 2014 Tony Awards.

Jessie Mueller from Beautiful: The Carole King Musical won best lead actress. A Gentleman’s Guide to Love and Murder took home best musical and Kathie Lee said “if you want to laugh your butt off, go see that show.” Neil Patrick Harris won best actor and Audra McDonald made history by winning her sixth Tony Award with the best lead actress in a play award.

The 2014 Belmont Stakes were run on Saturday June 7 and California Chrome tied for fourth.

After the race, one of the owner’s of California Chrome ranted on camera about how the race wasn’t fair to the horses who ran in all three Triple Crown races. “This is a coward’s way out” he angrily said in to the camera. The day after the interview took place, he ranted yet again on camera saying the same thing. But then Monday, June 9, he apologized, first to his wife, then to the other winners and the “entire horse world.” Both Kathie Lee and Hoda said his apology seemed sincere.

The Fault In Our Stars was number 1 at the box office this weekend and brought in $48 million.

Shailene Woodley and Ansel Elgort, stars of the movie, snuck into one of the showings to hear what people honestly thought about it. She wore a wig in attempt to not be recognized.

The Seattle Symphony is doing what they call the Symphony Sonic Evolution project where composers interpret famous songs in order to get the audience more involved.

They had Sir Mix-a-Lot come and perform his song “Baby Got Back” and had audience members dancing up on stage. One woman was especially enthused, dancing her heart out for the crowd.

Kathie Lee and Hoda shared their favorite things and Kathie Lee said that once again, her’s was a book.

She chose a book written by country star Jimmy Wayne called A Walk to Beautiful. The story is about his life, but has not yet been released. Kathie Lee said she was “sobbing her eyes out” while reading it.