In case you don’t really like the way grapes are shaped right now, someone has invented a way to eat them a little differently, called witch finger grapes, as seen on Kathie Lee & Hoda. The hybrid witch finger grapes are grown in such a way that they look like a crooked little finger, not unlike its namesake. You can get these grapes at freshdirect.com and are made by a company in Bakersfield, California called The Grapery. 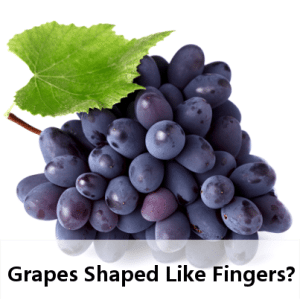 Witch fingers were created by cross breeding Native American Grapes from the east with some Mediterranean varieties, and came up with these. Both Kathie Lee and Hoda Kotb thought that they were delicious. It’s hard to say if they taste any different from any other grapes, but the fact that they are seedless could very well be a selling point for some.

Having a hard time coming to terms with entering into her sixth decade on this earth, Kathie Lee forbade Hoda from saying the word “sixty” on the show the other day, with the punishment for doing so having to rip a shot.

Today, that proved to be a much more serious statement than we previously thought, because Hoda had a table full of shots lined up in front of her when she got on the show. Some were water, some were vodka, and Hoda prayed with each one that it wasn’t vodka.

In search of ways to avoid saying sixty, Hoda asked viewers to turn in their suggestions for words to replace sixty. Michelle Wallace suggested saying “four decades short of a century,” which Kathie did not like at all. Donald Warrick thought it through very thoroughly, saying that she was only five years away from mandatory Medicare, among other things.

To make Kathie Lee feel a little better about her age, she and Hoda played a game of “Who’s Older?” First up was Steve Buscemi and Liam Neeson. It ended up being Liam, who is age 61. As it turns out Sigourney Weaver is older than Jamie Lee Curtis. Between Jeff Bridges and Denzel Washington, Jeff ended up being the older of the two. None of those were that surprising, but hey.

A study showed that children who grew up with multiple siblings have less of a chance that their marriages will end in divorce. For each sibling you have, you have a 20 percent better chance of having your marriage survive.