The New York City mayor’s plan to ban large-size fountain drink cups has been overturned in appeals court. The state appeals court struck down Michael Bloomberg’s law, saying that the city health board overstepped its authority by passing that law. 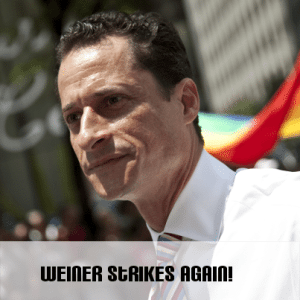 Speaking of New York, people are still having a field day with Anthony Weiner’s texting scandal, including Jimmy Fallon. On his show last night, he showed us just how catchy the mayoral candidate’s name is when you say it over and over again over a house beat.

Speaking of Anthony Weiner, his latest text partner in crime, Sydney Leathers, went on Howard Stern and aired out all of the dirty fantasies that Weiner had about her. Sydney said that Weiner loved pictures of her in heels and frequently had dreams about getting it on with her in the shower. To show us just how classy she is, Leathers also said that she isn’t against shooting an adult film. Weiner sure knows how to pick ’em.

And speaking videos, Anthony Weiner has a new campaign video out that is trying to change the public’s mind about him, as if that was actually a thing that is possible to do at this point. Weiner acknowledges his (many) detractors in the ad, but insists that he is still not going to quit, because apparently, New Yorkers don’t quit. They really don’t, do they, Anthony?

Vanity Fair did another best-dressed list, and some of the women that made it on the list included Beyonce, Charlize Theron, Kerry Washington, Brooke Shields, and Kate Middleton. As for the guys, the standout was Justin Timberlake. One of the stranger entries on the list was Keith Richards, who just rocked those bandannas so well that they couldn’t leave him off the list.