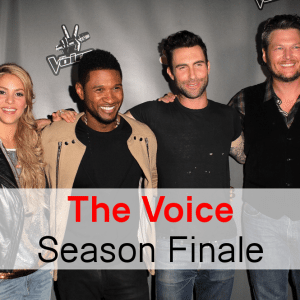 Kathie Lee picked Danielle Bradbury as her winner on The Voice, while Hoda went with The Swon Brothers. Either way, Team Blake Shelton could win big! (s_bukley / Shutterstock.com)

Last night, on June 17, The Voice‘s final three acts performed. Usher and Blake Shelton are the only judges left with contestants in the competition, so Adam Levine and Shakira cheered on from the side. Team Blake could win with either Danielle Bradbury or The Swon Brothers, while Usher has a chance with Michelle Chamuel.

The Swon Brothers are certain to get a record deal after this competition. They started out singing gospel in church and went on to form a mainstream band. They performed a classic Kenny Loggins song that really resonated with fans.

Who Will Win The Voice?

Michelle Chamuel has been a bit of a dark horse this season. She’s got a startlingly amazing voice and a quirky look. It’s like watching Mayim Bialik done her Amy Farrah Fowler get up and belt out “Since U Been Gone” by Kelly Clarkson. Awesome and strange. But mostly awesome.

Danielle Bradbury is your classic country darling. She will be a big star no matter what. At age 16, Bradbury has held her own against big names acts and artists, like Judith Hill. Bradbury had a special duet with Blake Shelton earlier in the finals that stirred up fans. “Timber, I’m Falling In Love” was seen as not age appropriate because Blake is 30 years Danielle’s senior.

Hoda picked The Swon Brothers and Kathie Lee thinks that Danielle Bradbury will take home the win in tonight’s season finale of The Voice. Cher is singing for one of the first times since her retirement.

The words “to create education better” will forever haunt Miss Utah. In her interview portion of the Miss America pageant, she stumbled over her words, got into her head, and sounded quite strange when answering a question about women in the workplace. The Today Show invited her back to redeem herself, along with the winner, Miss Connecticut. Miss Utah gave a very well-worded and simple answer about raising up more women in the workplace.

Kathie Lee said that Miss America probably feels pretty silly, being upstaged by Miss Utah. It’s OK, Miss Utah, it happens to the best of us.