Kathie Lee and Hoda with The Scoop

Kathie Lee and Hoda with The Scoop on The Today Show talked about Cherry Wine review, Lindsay Lohan arrested, The Hobbit: An Unexpected Journey trailer and pregnancy tests in bars. 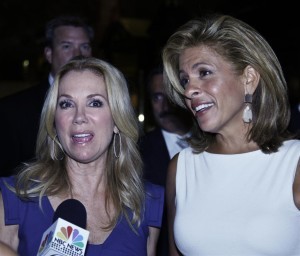 Kathie Lee and Hoda with The Scoop on Lindsay Lohan arrested in NYC, Jennifer Aniston Smart Water commerical, The Hobbit trailer and pregnancy tests in bars

The ladies sipped on some Cherry Wine from The Cherry Republic in Glen Arbor, MI for $15. Kathie Lee said it is lovely and has a little bit of a port taste to it.

Hoda said it was 2:00 am and Lindsay Lohan was driving around in a Porsche in NYC. They say she clipped a pedestrian who was walking. The person was taking to the hospital and released without any visible injuries.

After she hit him, she went into a nearby hotel and the guy who was hit called the cops and they went into the hotel and got her. She was charged with leaving the scene of the accident and was issued a desk appearance ticket and released without bail. The police said there was no alcohol involved, but it could be a probation violation she is on.

The media is always writing things in the paper about Jennifer Aniston, so she shot a Smart Water commercial with Jimmy Kimmel and it pokes fun at all the reports in the tabloids. It was supposed to be secret home footage they had on her and she is pregnant, her hair is actually a wig and she has a kid, which was played by Jimmy Kimmel. Kathie Lee said at least she has a sense of humor about it all.

A school in Rhode Island banned father-daughter and mother-son dances because they say it violates their gender discrimination laws. Hoda said there was a single Mom in the school system that complained about it and they decided to ban them. Kathie Lee said she understands some students don’t have both parents, but if they do have both parents then they are missing out on a very special experience. They said if you don’t have a mother or father, they should be able to bring a special person in their place.

A high-end pub in Minnesota called Pub 500 offers pregnancy tests for its patrons. You can swipe your credit card in a pregnancy test dispenser attached to the wall in the women’s restroom. Healthy Brains for Children installed them in the bathrooms.

The Hobbit: An Unexpected Journey is going to be in theaters on December 14 2012. It is all based on a book by J.R.R. Tolkien called The Hobbit. The trailer has been released and the ladies watched a clip of it. Kathie Lee said people love it and the story is going to be broken into three movies. Hoda said Ann Curry is going to go to New Zealand to cover the premiere for The Today Show and 30 Rock.