Jonah Hill went on Jimmy Fallon and apologized for his use of a homophobic slur after being surrounded and goaded by paparazzi. He was walking down the street shopping with friends and the paparazzi were yelling things at him, apparently making comments about the flowered shorts he was wearing. He fired back with a homophobic slur and later apologized.

“The word I chose was grotesque and you know, no one deserves to say or hear words like that,” Jonah Hill said. “And, you know, I’ve been a supporter of the LGBTQ community my entire life and I completely let the members of that community and everyone else down when I used a word like that this weekend. And my heart’s broken, and I genuinely am deeply sorry to anyone who has been affected by that term in their life. And I’m sorry and I don’t deserve or expect your forgiveness. But what I ask, is if you’re at home watching this, and you’re a young person especially, if someone says something that hurts you or angers you, use me as an example of what not to do. And don’t respond with hatred or anger because you’re  just adding more ugliness to the world. And again, I’m so sorry.” 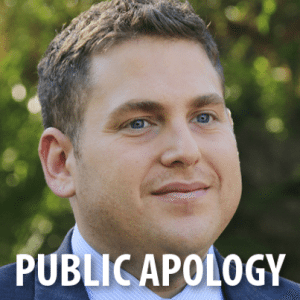 Kathie Lee and Hoda talk about how Jonah Hill issued a public apology on Jimmy Fallon after his use of a homophobic slur. (Joe Seer / Shutterstock.com)

He added, “I know I’m usually funny and stuff but this wasn’t funny, it was stupid.”

Kathie Lee and Hoda asked on Facebook what you think of celebrity apologies and 38% said yes, celebrities should apologize for their comments, but 62% said no an apology isn’t necessary. Hoda said the question is how people apologize. One Facebook user said if the word “if” is used in an apology then it’s not sincere, which I agree.

The final episode of True Tori with Tori Spelling and Dean McDermott aired on June 3 2014.

All season long, Tori had been looking for a grand gesture from Dean. On the final episode, he revealed that he got a tattoo of the wedding vows Tori wrote to him. Tori already had a tattoo of Dean’s vows to her.

“I will forever bring you solace when you are down-hearted,” Dean’s tattoo wrote. “I will wipe your tears with my tiny hands. I will comfort you with my body and embrace you with my wings I love you my beautiful boy for all of eternity.”

Kathie Lee and Hoda both said they were uncomfortable because “it’s all too personal and private.” Kathie Lee said she wishes them the best but she could never watch that on a daily basis.

Tori wanted to ask Dean if he ever cheated more than once and she decided to not ask it because she didn’t want to know. The question is, if your spouse or significant other cheated, would you want to know details?

Kathie Lee and Hoda pointed out that now that Tori Spelling’s show True Tori has ended, her new show Mystery Girls has started. Tori Spelling is the star and executive producer of the show, and stars alongside Jenny Garth.

Kathie Lee shared that she doesn’t like tattoos, saying she thinks it’s a generational thing. But she revealed that Frank has one.

She said when he was 14-years-old his older brother got him drunk and took him to a tattoo parlor in California. He got Giff tattooed on his arm and he didn’t even know it until he was sober.

Kathie Lee talked about how as you age, tattoos change in appearance and how you should consider that before getting one.

Today Show: Cheating Because Of In-Laws?

According to the dating site for cheaters called Victoria Milan, some cheaters say that bad in-laws can hurt a marriage.

They’re saying the reason they cheated on their spouse is because their in-laws were driving them crazy. I agree with Kathie Lee who said that cheaters will just find any excuse to do it. But really, is anyone else as shocked as me that there’s actually a website specifically for cheaters?

Sinead O’Conner is perhaps most recognizable in her video for “Nothing Compares 2 U” where she sported a shaved head.

But now she’s almost unrecognizable on the cover for her new album I’m Not Bossy, I’m the Boss. She’s sporting a jet black bob hairstyle, wearing a black leather outfit, and holding a black guitar. Kathie Lee and Hoda both said they thought it was Katy Perry when they first saw it.

Today Show: Mariah Carey Wears a Gown to the Park

Mariah Carey was recently caught on camera riding a subway in a gown, but this time she’s playing in the park.

The singer was photographed wearing a mermaid-style ballgown at the park while playing with her kids. Some say she’s doing it to get attention for her CD, which Kathie Lee & Hoda heard from other sources was not doing as well as her CDs often do. Her new album, Me. I Am Mariah is expected to debut at number 3 and if that happens it will be her lowest sales debut for a non-holiday studio album since 1991. But, it would be her 17th top 10 album, which you really can’t complain about!

Miranda Lambert was on the latest cover of the Rolling Stone. She said she lost 25 pounds but doesn’t understand why people are making such a big deal of it.

Also, her plane had to make an emergency landing because there was an issue with the flight. It landed safely in West Virginia and she was photographed in a haz-mat suit.

The website Sizeable lets you choose a model that is your size, in order to see the exact outfit you’re considering buying on someone with your body type.

It’s a great idea because often times an outfit can look completely different depending on the size of the person.

Kathie Lee & Hoda: Share Why You Love Your Dad

Father’s Day is coming up on June 14 and Kathie Lee and Hoda want to know why you love your dad.

They’re asking you to post a video or a photo on their Facebook page of you saying “I love my dad because…”. They will share the videos or pictures on air next week.