Kathie Lee and Hoda shared that in honor of National Donut Day, Dunkin’ Donuts is giving away a free donut with beverage purchase. But it’s only in select stores on June 6 2014. Go out and try to get you a free donut!

Also, eight-year-old Angelina Jordan Astar won Norway’s Got Talent with 46% of the vote. Her blues-y singing style won her the equivalent of $80,000. 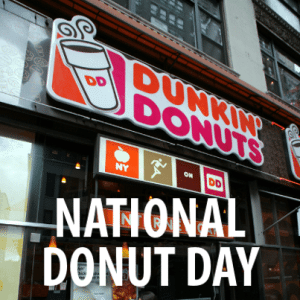 On National Donut Day and Kathie Lee and Hoda shared how you could get a free donut! (Angela Waye / Shutterstock.com)

The website College Candy isolated celebrity laughs and asked you to try and guess who they belong to. Kathie Lee and Hoda decided to play along.

The first laugh belonged to either Bradley Cooper, Brad Pitt, or George Clooney. Kathie Lee and Hoda both guessed wrong thinking it was Bradley Cooper when it was actually Brad Pitt.

Second, they had to guess if the laugh they heard belonged to Cameron Diaz, Gwyneth Paltrow, or Demi Moore. Kathie Lee and Hoda both guessed correctly by saying Cameron Diaz.

Lastly, they had to guess whether the laugh belonged to Will Smith, John Travolta, or Tom Cruise. Hode guessed correctly by saying Tom Cruise.

A new survey was released that said TVs in the bedroom mean more intimacy.

According to the survey, people who have a TV on in their bedroom are twice as intimate as those who don’t. Hoda said the people with a TV hooked up twice a week, and almost half of them revealed they were multitasking, watching their favorite show while doing it.

Hoda also shared that she heard that the last thing you listen to or watch before you go to bed should be an uplifting thing.

This weekend is the triple crown weekend with the running of the Belmont Stakes on Saturday, June 7. California Chrome is set to race, and Hoda said he’s going to go all the way.

If California Chrome wins, he will be the first Triple Crown winner since 1978. Only eleven horses have won the Triple Crown since 1919.

Kathie Lee and Hoda were both taking sips of the Belmont signature drink called the Belmont Jewel. It contains bourbon, lemonade, and pomegranate.

After years in prison, a man was finally set free. When he got into town he couldn’t help himself and he started running around the main street screaming “I’m free!” A small boy was walking down the street with his mom and saw what was happening. He walked over to the man and tugged at his shirt and said “Hey mister, so what? I’m four.”

It’s Fan Friday and a fan sent in a video they made using an app that allows your pets to talk. She took a picture of her small dog and made him talk about watching the show and wanting to create her own talking pet video.

Another fan that watches the show every day with her two-year-old named Maddie shared that she is pregnant with baby number two and it’s a boy!

Also, this morning it was time for Johnson’s Baby of the Week.

Quest Koa Baker was born April 19, 2014 in Bismarck, North Dakota. He was born on daddy’s birthday!

Emry Michael Thames was born May 17, 2014 in Cleveland, Ohio and his parents tell all other parents to try and enjoy every moment even the little ones.

Lastly, Elizabeth Marie Gentry was born May 22, 2014 in Orlando, Florida. Her parents say their daughter is already a great sleeper!