Kathie Lee Gifford and Hoda Kotb kick off their portion of The Today Show doing what they do best…sipping on a cocktail. Today is the last of a four-day celebration for the Queen’s Diamond Jubilee and in honor of that, the ladies drink a Pimm’s Cup, a drink famous in England.

Last night, the Queen’s Diamond Jubilee was celebrated with a concert at Buckingham Palace featuring Elton John, Paul McCartney, Stevie Wonder, Annie Lennox and many more stars. Prince Phillip, father of Prince Charles and Duke of Edinburgh, was missing…he was out sick, but Prince Charles did a shout out to his father. Price Phillip will be 91 years old soon. Hoda Kotb said Queen Elizabeth II never does interviews, just speeches and wonders what she would say if asked certain questions. 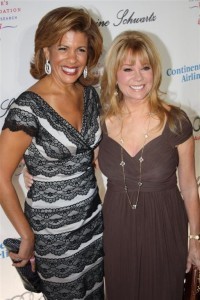 Coming up on the show today is Alan Jackson, who has a new CD out today, Thirty Miles West. Joining him in the studio today is his daughter, Mattie Jackson, who joins Kathie Lee and Hoda at the table. Mattie, a graduate of the University of Tennessee, would one day like to steal the jobs of Kathie Lee and Hoda…she even skipped classes to watch them.

Pictures have been released of Lindsay Lohan on the set of the Elizabeth Taylor biopic she is starring in. The pictures are an eerily resemblance of Elizabeth Taylor. Kathie Lee said if she makes it about her work, then everyone is ready to say good for you and go on.

Kathie Lee & Hoda: Are You Normal?

A new game show has premiered on OWN titled, Are You Normal? They asked around 1,000 people these questions and you answer them to determine if your habits are normal, The questions are:

Today is the last day to vote in the Kathie Lee and Hoda Hot Dads contest. You can go to ivillage.com/hotdads to vote. They take a look at some of the contestants. The winner will be announced next Tuesday on their show.