Alex Rodriguez‘s image has been damaged irreparably over the last few years due to his juicing and unwillingness to bow out of the league, with headlines such as “Just Go” being printed across the cover of the New York Post. It is expected that he will be put up for suspension today, but there is a loophole. If A-Rod decides to file an appeal against the suspension, he will be able to jump right back in, and even play in tonight’s game against the White Sox. 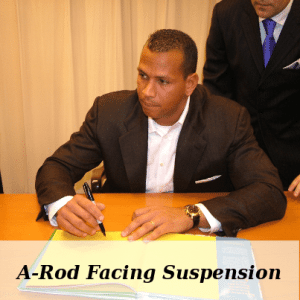 Alex Rodriguez is likely to be suspended from the league today. (Mary A Lupo / Shutterstock.com)

Not only does it mean that A-Rod can play, it also means he will get paid. Back in 2007, he signed a $275 million 10-year contract. If he’s suspended, A-Rod will lose $34 million, meaning that he will still get $241 million of that contract. It’s funny that, throughout this whole process, one of Rodriguez’s biggest concerns has been getting paid. Because $241 million would leave anyone worrying that they won’t be getting their bills paid. Maybe he spent all of the money on steroids?

It is likely Rodriguez will be booed, even if he does get to play. Wherever he goes, A-Rod will be known as the one that brought shame to the New York Yankees. In a press conference, he also had to address the issue of sitting down to talk to his kids about this controversy, something I’m sure he is not looking forward to. In another little bit of irony, A-Rod has come out and said on a few occasions that he just can’t trust the Yankees.

A-Rod isn’t the first player on the Yankees to have used performance-enhancing drugs, though. Andy Pettitte used them when he had an arm injury to recover from it faster and be able to play with it, but admitted to it right away and stopped using them shortly thereafter. Now, he is adored by fans.

In another non-related baseball issue, a man is receiving a lot of attention for having some difficulty opening a water bottle during a baseball game. Check out the video below and draw your own conclusions about whether or not this deserves as much attention as its getting.

It looks like Ellen DeGeneres is hosting the Academy Awards for the second time, seven months from now. The first time she did it, she got an Emmy nomination, so we know she will do a great job at hosting the award show. Everyone loves Ellen, meaning that there won’t be quite as much controversy behind the host this year.

Regis and Joy Philbin make a wonderful couple, and apparently wonderfully talented children, as well. Their daughter, Joanna Philbin, just released her fourth book, Rules of Summer, a book about two girls that share an unforgettable summer together.