While Hoda Kotb was more than happy for this week to start, Kathie Lee couldn’t have been more glum, as she entered her final few days of being in her 50s. However, she had a moment of clarity when reporting that singer Eydie Gorme passed away at age 84 on Saturday. Steve Lawrence, her husband, released a statement revealing just how lucky he felt to have been her husband, but also mourned both his and music’s loss. To brighten the mood, Hoda brought up Kathie Lee’s birthday song. 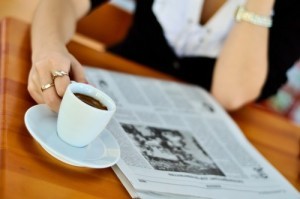 Eydie Gorme died at age 84 over the weekend.

Hoda went to Nashville this weekend for a surprise birthday party that was held for her friend Janie’s 50th birthday. Janie is the co-writer of all of Hoda’s books, and Hoda considers her to be a great friend. Hoda said that she was in hog heaven with all the barbecue that was going on.

Everyone has been wondering how Lea Michele has been following the death of her boyfriend, Cory Monteith, and she gave us an idea of that when she made a surprise speech at the Teen Choice Awards the other night. After receiving an award for best actress in Glee, Leah gave a tearful dedication to Cory.

In The New York Times over the weekend, a woman asked what people thought of her stealing a box of chocolates off her neighbor’s doorstep after they spent yet another weekend partying and being loud. She thought it was compensatory, but Kathie Lee and Hoda thought she should have communicated with them, instead.

100,000 people raised their hands in response to the question: do you want to take a one-way trip to Mars and start a settlement there in 2022? Of the 100,000 people who want to go, only four will be sent, so hopefully, they will all like each other. Hoda wondered if any of the 100,000 people had anything to live for, being that they were willing to leave everything behind to go live on an alien planet.

In this Monday’s edition of favorite things, Kathie Lee showed off A Nantucket Experience by Shellie Dunlap. The book covers a year in the life of selling real estate down in Nantucket. It started out as a blog, then turned into a book when her blog took off.

As for Hoda Kotb, her favorite thing was also a book, These Few Precious Days. The book releases a lot of details about the JFK family that the author promised not to use until after many of the key figures in the book had passed, so there are plenty of juicy details in the book.