South African Penguins from Jenkinson’s Aquarium in Point Pleasant Beach came to the show today to promote the Stronger Than The Storm, a consumer campaign that is trying to raise awareness of the Jersey Shore’s recovery from Superstorm Sandy. All I can say after seeing the three-month-old penguin is that I want one.

Cassidy Gifford is 20 years old today, and Kathie Lee couldn’t have been happier to congratulate her daughter on exiting her teenage years. 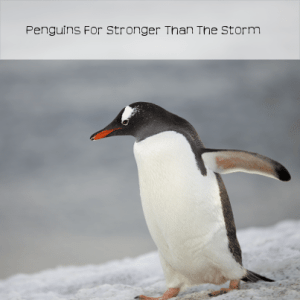 Jenkinson’s Aquarium is helping promote Stronger Than The Storm with baby penguins, as if there’s any other way to do it.

A survey has been released from the National Council of Aging, in which they surveyed 4,000 adults on their beliefs on aging. Surprisingly, only 9 percent of those surveyed said that those over 60 are wiser.

It looks like that old adage about wisdom coming with age might not be so true, after all. Kathie Lee didn’t agree with this statistic, saying that, if she didn’t get wiser with age, what was the point of getting older?

Jane Seymour has become a wedding dress model and designer because, as women are having second and third marriages, they want to wear more modest dresses in their older age. Or maybe she’s just designing and not modeling. Or maybe it’s the other way around.

Apparently, Kathie & Hoda had a few too many cocktails this morning, because they couldn’t get their facts straight. As a probably inebriated Kathie said, “Hey, this is NBC News! What do you want?”

Bobbie Thomas came on to talk about Drew Barrymore’s new cosmetic line called Flower. One of the highlights of this product line was a mascara wand that changes shape as you twist it, allowing you to comb your eyelashes for both volume and length. Then, there was a triplettle lipstick that had three different colors in it, allowing you to swap them out in case you wanted a quick change-up.

One product wasn’t from Flower was called “Blinkies,” which were essentially eyebrow tattoos. These are much easier to put on than eyebrows you have to paint on. The last product was called “My Amazing Blowdry Secret,” which helps cut your blow dry time in half.