You never know what you’re going to find while perusing Craigslist. The ads on there range from normal classifieds fodder all the way to just weird. Kathie Lee & Hoda Kotb took a second to show us some of the strangest Craigslist ads they could dig up. 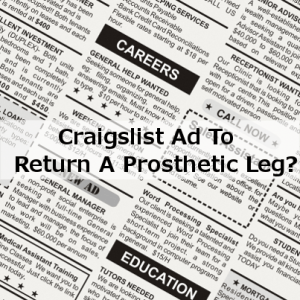 One of several funny Craigslist ads Kathie Lee & Hoda checked out was from a man trying to return a prosthetic leg.

First up was an ad where two brothers were looking for wedding dates to bring with them to Saratoga, New York. Their cousin was getting married, and to keep them on their best behavior, were required to bring dates to the wedding.

Any brave woman that signed up was guaranteed an open bar, an excuse to dress up, and some dance moves so good that a waiver was hinted at. The brothers ended up bringing two childhood friends to the wedding.

The next ad was for a good Samaritan that was trying to return a prosthetic leg that he’d found on a public bus earlier in the day. According to the ad, the leg was wearing a Lucchese Brand cowboy boot, a boot that was so magnificent that the person who found the leg couldn’t help but to try it on. The man wanted to meet the owner for lunch sometime to give the leg back. Seems legit.