Kathie Lee and Hoda celebrated National Candy Month for their Who Knew? segment on June 4 2014. They welcomed CEO and Founder of Dylan’s Candy Bar, Dylan Lauren, to share some sweet information as Kathie Lee ventured to The Sweet Shop across the street from the studio in New York City. 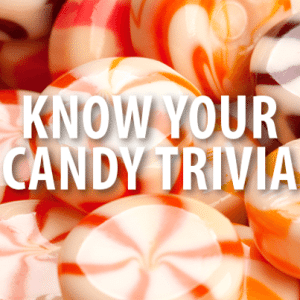 The first question was what is the best selling Pez dispenser of all time? Is it Peter Pez, Superman, Santa Claus, or the Easter Bunny?

The correct answer is Santa Claus! Dylan Lauren shared that most Pez dispensers started with no characters and was more for adults, but then in the 1950s toy characters came around.

The second question was what is the top Jelly Belly bean flavor in America?

The options were very cherry, watermelon, blueberry, or bubblegum. The answer is very cherry!

Dylan Lauren explained that very cherry is the most popular, but coming in at a close second and having actually replaced very cherry for a while, was buttered popcorn. She also shared that some of their most popular flavors include earwax and throw-up flavored. Yuck!

The next candy question Kathie Lee asked was which of the following candy bars is the oldest: Snickers, Baby Ruth, Milky Way, or Hershey’s milk chocolate bar?

The answer is Hershey’s milk chocolate bar. Lauren Dylan said that the candy bar debuted in 1900 and was given to soldiers during the way for energy. It was even considered a food group!

The answer is carbon dioxide gas. Dylan Lauren explained that when the sugar is heated, it’s mixed with carbon dioxide, causing bubbles. When you put the candy on your tongue, the sugar melts and the bubbles pop.

The next question Kathie Lee asked was what was the first individually wrapped penny candy sold in the U.S.? Was it Jolly Rancher, Hershey’s Kisses, Dove chocolate, or Tootsie Rolls?

The answer is Tootsie Rolls. Dylan Lauren shared that the Tootsie Rolls started in 1896 and the name was the founder’s daughter’s nickname.

The last person was asked to finish the lyrics to Bow Wow Wow’s 1982 hit “I Want Candy“.

Dylan Lauren shared that surprisingly, the song was on the top 10 Billboard charts for seven years. I have to admit, the version of the song I actually know is the one sung by Aaron Carter!