Actress Paula Patton stopped by The Today Show set for a brief interview with Kathie Lee Gifford and Hoda Kotb.  She was quick to point out how shocked she was at receiving a role in “Mission Impossible: Ghost Recon,” which opens today in theaters around the country. She only had a child five months before the audition and was nowhere near “spy shape.” Nevertheless, she rocked the audition and welcomed the chance to work next to Tom Cruise and Jeremey Renner once she was offered a leading role.

She discussed shooting in Dubai, where an action scene was shot on the 120thfloor of a skyscraper. 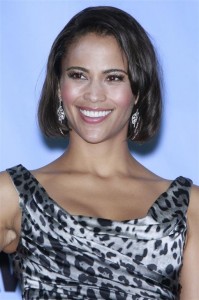 The scene involved Tom falling out of the building, Jeremy catching Tom, and then Paula grabbing onto Jeremy at the last minute. A stunt man was in charge of holding onto Paula’s ankles during the shoot and she admitted to being extremely nervous, while adding that Tom was as cool as a cucumber.

Paula’s child is now two years old and he comes first, as sleep gets the backseat. You just plow ahead, she said, using her amazing mom for support. Her marriage to singer Robin Thicke works, even with their busy schedules, due to a passion that remains undying. They simply figure out the logistics and keep things fresh in all aspects of their relationship.

Kate says the hardest part of the season is having no one to kiss and, even worse, watching others kiss. Generally, seeing couples around the holidays bothers people. The best solution is to spend time with your other single friends. Organize a potluck dinner or go out for drinks. Make it a goal to meet one person and get a number for setting up a rendezvous at a later date.

Michelle agreed and went on to say that the holiday season is about spending time with family and friends, not harping on the fact you may or may not be single. Hoda goes to parties all the time, often alone, and typically has a great time. She began to notice soup kitchens and events around the holidays and realized she could either redefine her holiday season or sit at home alone. It sounds like she chose the former.